The recreational vehicle (RV) industry is influenced by many strong macroeconomic factors and is extremely sensitive to overall strength of the economy, as buying an RV is a large discretionary purchase for the majority of customers. Some of the prominent players in the RV market include Thor Industries Inc. THO, Winnebago Industries, Inc. (WGO - Free Report) , Forest River Inc., Camping World Holdings Inc. CWH, Skyline Corporation SKY, REV Group, Inc. REVG and NeXus RV among others.

The RV industry took a massive hit during the 2008 recession but has enjoyed exponential growth since then. Aided by broader economic recovery and growing popularity of van life movement among millennials, the RV industry has recovered significantly, with total shipments surging around 192% from 2009 to 2018 timeframe.

Amid global recession worries, RV industry is feeling the pain, with shipments declining in 2019. However, things appear a little encouraging as head into 2020.

RV Shipments to Decline in Double Digits in 2019

Shipments of RV are anticipated to fall 16.9% year over year in 2019 to 402,100 units. Notably, the U.S.-Sino trade dispute and subsequent tariff war not only affected the economies of the United States and China but also slowed global economic growth. With the weakening of the economy, RV sales generally fall sharply, as consumers do not feel confident about making a large recreational purchase.

Decline in RV Shipments to Abate in 2020

The RV Industry Association expects the double-digits percentage declines in wholesale shipments to ease significantly in 2020. It forecasts wholesale shipments to come in at 386,400 units in 2020, representing 3.9% decline year over year. Towable RVs and motorhome shipments are forecast to end 2020 with 344,400 and 42,000 units, respectively.

Compared to 2019, the year 2020 is expected to witness a much lower year-over-year decline in RV shipments on the back of improving U.S. economic growth and de-escalation in the trade fight between the world’s two largest economies, both of which saw positive updates recently in terms of business growth.

The U.S. economy is in good shape with a robust labor market, higher consumer spending and a dovish monetary stance taken by the Fed. Preliminary U.S.-China trade truce over import duties, mild relaxations in Brexit uncertainty and the Federal Reserve’s three consecutive rate cuts have boosted market sentiments and are likely to revive global economic growth.

RV Sales Have Slowed But Still Quite Strong

The industry surely holds promise, as millennials are more inclined to spend on experiences that recreational vehicles can deliver. If the economy stays strong and continues to grow, RV sales will likely get a boost, thereby enhancing the performance of stocks within the industry. Below we have listed three stocks to play the RV market.

3 RV Stocks to Watch Out For

Winnebago Industries: One of the best known RV manufacturers, Winnebago has managed to brave the RV industry slowdown in 2019 on the back of strong backlog, game-changing acquisitions, expanding sales footprint and solid financials. 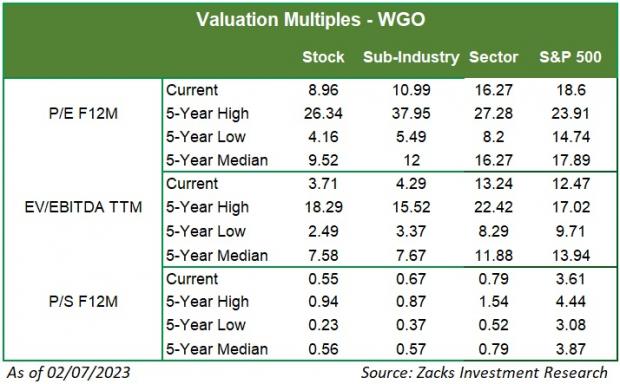 Impressive sales in both towable and motorized divisions are increasing market share wins for this RV giant. This Zacks Rank #2 (Buy) company, which is riding high on the strength of its buyouts of Grand Design, Chris-Craft and Newmar, is expected to keep its winning streak alive going into 2020.The Zacks Consensus Estimate for fiscal 2020 earnings and revenues indicates year-over-year improvement of 35.2% and 17.4%, respectively. You can see the complete list of today’s Zacks #1 (Strong Buy) Rank stocks here.

Thor Industries: Thor has been banking on solid European RV segment, improving operational efficiency and the acquisition of Erwin Hymer Group (“EHG”), which was completed in the beginning of fiscal third-quarter 2019. 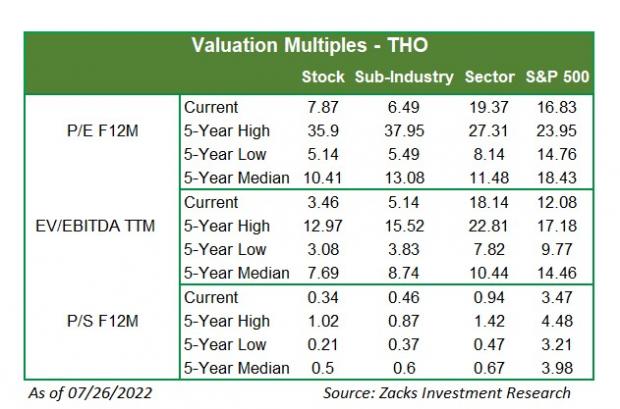 Thor is optimistic about fiscal 2020 and believes that it will leverage on continued integration and growth opportunities of EHG. The Zacks Rank #3 (Hold) firm also remains focused on working capital management, improving net cash by operating activities and reducing net debt level. The Zacks Consensus Estimate for fiscal 2020 earnings and revenues indicates year-over-year improvement of 11.2% and 1.2%, respectively.

LCI Industries LCII: Elkhart, IN-based LCI Industries is a manufacturer and supplier of components for RVs and adjacent industries in the United States and internationally. This Zacks #3 Rank firm’s strategic endeavors are likely to lead to growth going forward. 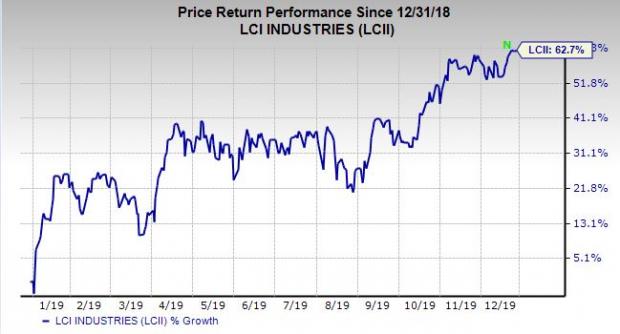 LCI Industries’ buyout of Lewmar and Lavet are likely to boost its international opportunities. The company’s efforts to win market share, with target areas including markets adjacent to RVs as well as the aftermarket segment for RV parts bode well. Its focus on trimming its leverage and increasing returns to shareholders is also appreciated. The Zacks Consensus Estimate for fiscal 2020 earnings and revenues indicates year-over-year improvement of 3.8% and 11.9%, respectively.