The deal, signed in November 2019, is an important step for Solistica’s Brazilian strategy, where it expects to turn into the first fully integrated Third Party Logistics (“3PL”) solution provider. This will help Solistica stand out from other key players in the market. It is already the leading provider of the Less than Truckload (“LTL”) logistics service in Brazil through acquisitions like Expresso Jundiai and Atlas.

Last week, the FEMSA Comercio unit was notified by FEMSA’s minority partner – Grupo Socofar (“Socofar”) – of its intention to exercise its put right to sell the remaining 40% interest in Socofar. Following the transaction, FEMSA, through its subsidiary, will be the sole shareholder of Socofar.

The terms of the put option determine the valuation of Socofar through a fair market procedure by a panel of independent investment bankers. The final price for the 40% stake will be local currency adjustments, upon the closing of the transaction. The company expects to close the transaction in January 2020.

Over the years, FEMSA has been taking prudent steps to diversify the product portfolio, while expanding in the small-box retail segment. In sync, the company recently formed a 50-50 JV with Raízen Conveniencias in Brazil, and acquired minority stake and agreed to form a JV with Jetro Restaurant Depot (“JRD”). The Raízen JV marks FEMSA Comercio’s entry in Brazil’s convenience sector as a developer and operator of small-format proximity and convenience stores. The transaction focuses on increasing penetration of Raízen’s Select convenience stores at its service stations and developing value propositions for the OXXO brand’s stand-alone proximity outlets.

These transactions reflect the company’s focus on strengthening position in Brazil, Mexico and other Latin America markets.

Apart from these, the Zacks Rank #4 (Sell) company is expanding drugstore operations as it sees significant potential in the space. Additionally, FEMSA is on track to build infrastructure and integrate its four legacy drugstore operations into a single operating platform.

Notably, shares of the company have gained 5.3% in the past three months compared with the industry’s 2.2% growth. 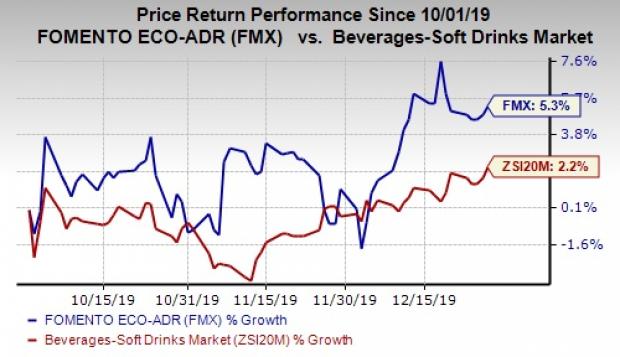 3 Better-Ranked Picks From the Beverage Industry

Luckin Coffee Inc LK, also a Zacks Rank #2 stock, has delivered a positive earnings surprise of 2.21% in the trailing four quarters, on average.

Here's Why You Should Add NuVasive Stock to Your Portfolio