In the past five trading days, telecom stocks continued to mirror the broader equity market performance and witnessed an uptrend as the stage seems set for signing of the “Phase One” deal between the United States and China on Jan 15. The year-end rally was further buoyed by the proposed tariff cuts by the communist nation to boost its economy. With U.S. firms likely to gain greater market access in China per the partial trade accord, 2020 appears to be quite promising for the beleaguered industry.

Although President Trump tweeted the official date for the formal signing of the “Phase One” deal, China has maintained silence on the same. Keeping the cards close to the chest, Beijing is yet to publicly commit to key planks and unveil the specifics of the partial agreement, stating only that details will be released after the signing. Nonetheless, both the countries remain intent to seal the trade truce as early as possible on domestic compulsions and to fuel economic growth.

Meanwhile, China has increased its import basket of U.S. agricultural products like soybeans, following a pledge to purchase $200 billion of goods over the next two years, including $40-$50 billion of agricultural products each year. In addition, China has lowered tariffs on more than 850 goods, ranging from frozen pork to semiconductors from Jan 1, in order to improve its flagging economy.

Notably, the Trump administration had earlier called off a 15% tariff on nearly $160 billion worth of imports from China, including toys, smartphones, laptops and other electronics items. The U.S. government will also halve its 15% levy on $120 billion worth of Chinese import basket, leaving the tariff regime limited to 25% taxes on $250 billion and 7.5% on $120 billion, per the “Phase One” deal.

Through this, Verizon has reached its goal of deploying 5G service in more than 30 cities by the end of 2019. Its service, which includes high speed, low latency and expanded coverage, is available with seven 5G-enabled devices. With industry-leading wireless products and services, the company is well positioned to benefit from accelerated 5G launch in the United States. (Read more: Verizon 5G Network Goes Live in 31 Cities, Race Intensifies)

Markedly, the collaboration will deploy avant-garde mobile network services in the first half of 2020 and is anticipated to be functional for at least five years. This, in turn, will allow Vodafone to scale up its 5G requirements and place orders with Nokia for site delivery. Apart from delivering high-quality 5G services, the deal will include the deployment of IP/Optical, 5G radio access network and managed services to its Australian customers. (Read more: Vodafone Australian Unit Picks Nokia as 5G Network Vendor)

3.      In a bid to reduce debt, Maxar Technologies Inc. (MAXR - Free Report) has inked an agreement to sell its space robotics subsidiary — MacDonald, Dettwiler and Associates (“MDA”) — to a group of private equity firms for a whopping $765 million. The purchasing entity led by Northern Private Capital (“NPC”) will be accountable for the development of Canadarm and Canadarm2 robotic manipulators, which are used on the Space Shuttle and the International Space Station, respectively.

Per the deal, the Toronto-based private investment firm will acquire MDA’s operations across Canada and the United Kingdom. The transaction is financed by a mix of debt and equity. The space technology provider intends to utilize the proceeds from the transaction for the development of space infrastructure, earth intelligence and geospatial data and analytics. (Read more: Maxar Divests Space Robotics Arm for $765M, Stock Gains)

4.     Cincinnati Bell Inc. (CBB - Free Report) recently informed customers that that it is on the verge of losing FOX cable channels in 2020 due to an ongoing contract conflict between the cable company and Fox Corporation. The failure to ink a new contract, which expires on Dec 31, is likely to give a massive blow to the local cable provider as it may witness a substantial churn rate if the channel rate negotiation ultimately falls flat.

Per media reports, the rates charged by Fox have surged more than 200% since 2009. The New York-based media company is currently seeking to hike prices by a hefty 20%, which reflects 10X the existing rate of inflation. The regional provider of data and voice communications services voiced concerns that there are more than 700 mid-sized and small cable operators that are negotiating with Fox on channel rates. (Read more: Is a High Churn Rate in the Cards for Cincinnati Bell?)

5.     Zayo Group Holdings, Inc. has augmented the network connectivity between Montreal, Quebec to Albany, NY with the expansion of its fiber network infrastructure in the region. The move will enable the company to provide high-quality connectivity to support the seamless transition of enterprise and mobile carrier customers to 5G technology.

The network expansion will add about 100G capable new wavelength route miles to connect the largest city in Quebec, Canada with one of the busiest cities in the United States. The extensive wavelength network is expected to benefit regional business and enterprise customers with dedicated bandwidth facility for data-intensive content, streaming services and IoT applications. The shorter and more direct route between the cities of two neighboring countries is likely to be operational by January 2020. (Read more: Zayo Boosts Montreal-Albany Dedicated Network Connectivity) 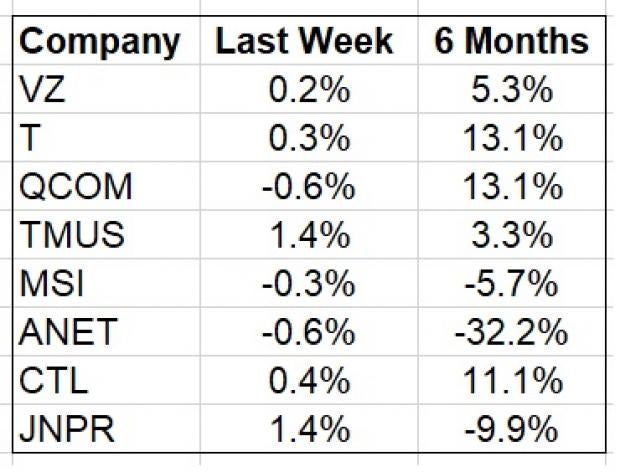 Over the past six months, AT&T and Qualcomm both have been the best performers with their stock appreciating 13.1%, while Arista Networks has been the biggest decliner with its stock down 32.2%.

Over the past six months, the Zacks Telecommunications Services industry has recorded average growth of 4% and the S&P 500 has rallied 8.3%.