Verizon Communications Inc. (VZ - Free Report) announced that it has decided to part ways with broadcasting company — Cox Media Group — due to an ongoing contract conflict. The telco behemoth decided to withdraw television station, WPXI, from its channel lineup after both the companies failed to reconcile on a new retransmission consent agreement. This step is likely to deal a massive blow to Verizon Fios customers.

Verizon alleged that Cox Media Group is currently seeking to hike prices by a hefty 70%. However, Cox Media Group claimed that it had tried to negotiate at rates way below existing market price, which has further complicated the situation. As a result, customers, who are primarily based in key markets like Pittsburgh, Syracuse and Boston, will be losing out on four TV channels, namely WPXI-Pittsburgh, WSYT and WNYS in Syracuse, and WFXT-Boston 25 News.

Per media reports, the broadcasting and digital media conglomerate has tried to mend differences with Verizon at multiple points for uninterrupted services to customers. However, Verizon is determined to terminate the contract and has refuted all the offers from Cox Media Group. As of now, the media conglomerate is leaving no stone unturned to reach an agreement with Verizon soon.

With one of the most efficient wireless networks in the United States, Verizon deploys state-of-the-art technologies to solve complex business challenges and deliver increased capacity, lower latency and faster speeds, backed by customer-focused planning, disciplined engineering and strategic investments. In the enterprise and wholesale business, the company is changing its revenue mix toward newer growth services like cloud, security and professional services. It intends to capitalize on the countless innovative technology solutions being developed in the IoT and telematics ecosystem across multiple industries.

Markedly, Verizon has systematically invested in 5G technology to gain a foothold in the industry. With wide availability of 5G Ultra Wideband network service in 31 U.S. cities, the company expects to capitalize on the impending 5G boom and outsmart competition with major players like AT&T Inc. T and T-Mobile US, Inc. TMUS. In 2020, Verizon is likely to optimize ample opportunities while retaining its lead in promulgating 5G mobile networks nationwide by using virtualized machines, advanced levels of operational automation and adaptability for better customer service.

Verizon has long-term earnings growth expectation of 3.2%. Driven by healthy momentum in the wireless business, the stock has gained 8.3% compared with the industry’s growth of 15.2% in the past year. 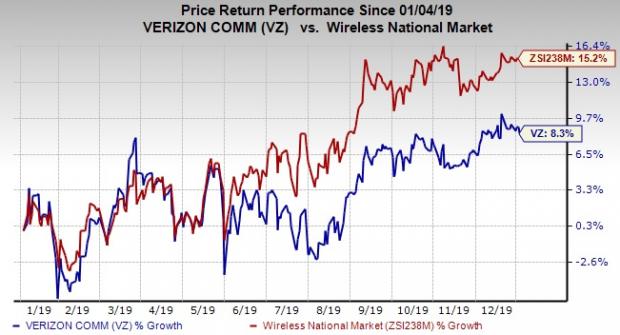 A better-ranked stock in the broader industry is Qualcomm Inc. QCOM, sporting a Zacks Rank #1 (Strong Buy). You can see the complete list of today’s Zacks #1 Rank stocks here.