The contract has been awarded by the Naval Sea Systems Command, Washington, DC.

Work related to the deal will be performed in Moorestown, NJ, and is expected to be completed by December 2020.

What is AEGIS CSEA?

As the developer of the Aegis Combat System, Lockheed Martin continues its 40-year legacy as the AEGIS CSEA for the U.S. Navy. The AEGIS CSEA is responsible for combat system engineering services, including the design,
development and life cycle support, for all AEGIS-equipped ships.

Heightened geopolitical tensions and increasing terrorist activities across the globe have compelled nations to strengthen their military arsenal, with missile systems constituting an integral part of it. The United States, being the largest exporter of military weaponry worldwide, follows a similar strategy. This is evident from the allotment of $1.7 billion to purchase 37 AEGIS Ballistic Missile Defense systems in the U.S. fiscal 2020 defense budget.

Recently, Japan's defense ministry awarded Lockheed Martin a contract for delivering two SSR antenna sets for two planned land-based AEGIS Ashore ballistic missile defense systems. Further, in September 2019, the company's RMS segment was awarded a contract to develop and certify the AEGIS Ballistic Missile Defense (BMD) 6.0 capability. Such frequent orders, including the latest one, are indicative of the robust demand enjoyed by the AEGIS program in the defense space, which in turn is expected to boost Lockheed Martin’s revenues.

Lockheed Martin’s stock has gained 54.6% in the past year compared with the industry’s growth of 24.3%. 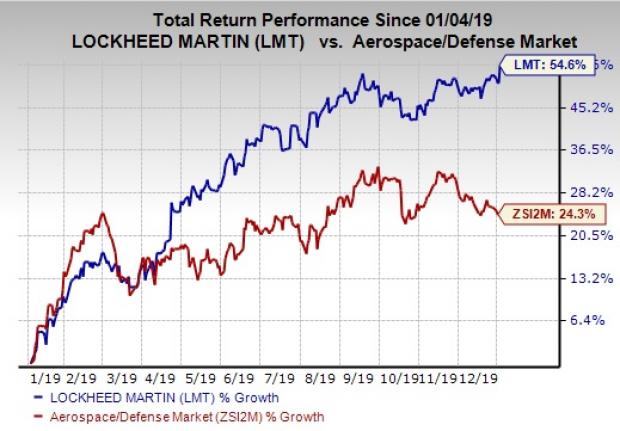 Air Industries Group delivered average positive earnings surprise of 52.78% in the last four quarters. The Zacks Consensus Estimate for 2019 loss has narrowed 63.6% to 4 cents over the past 60 days.

Here's Why You Should Add SolarEdge Technologies Stock Now