Here's Why You Should Hold Onto Albemarle (ALB) Stock for Now

Albemarle Corporation (ALB - Free Report) is poised to benefit from strong expected growth in the battery-grade lithium market. It should gain from rising demand for lithium-ion batteries that are used to power electric cars.

Shares of Albemarle are down 6.6% over a year, compared with the 21.2% decline of its industry. 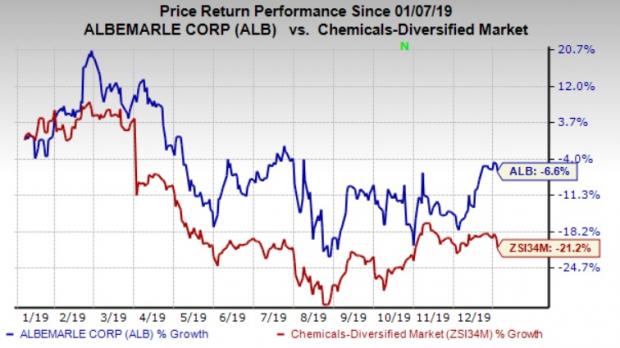 Albemarle is witnessing strong demand for lithium in battery-grade applications. It is executing a number of projects aimed at boosting its global lithium derivative capacity.

The market for lithium-ion batteries has a lot of untapped potential. Demand for these batteries are expected to go up with their increasing adoption in consumer electronic products as well as efforts to promote the use of electric cars by several governments to curb pollution. The company sees strong long-term demand for lithium.

As part of its lithium growth strategy, Albemarle, in 2019, completed its joint venture (JV) transaction with Mineral Resources Limited under an Asset Sale and Share Subscription Agreement. The 60/40 JV between Albemarle and Mineral Resources is named as MARBL Lithium Joint Venture (MARBL). Under the deal, Albemarle purchased a 60% stake in Mineral Resources’ Wodgina spodumene mine in Western Australia for $1.3 billion.

Moreover, Albemarle is gaining from continued strong demand for flame retardants, especially in electronics, which is supporting volume growth in its Bromine Specialties unit. Demand in the oilfield market also remains healthy.

Albemarle also remains committed to deliver incremental returns to shareholders. The company, in early 2019, raised its quarterly dividend by 10% to 36.75 cents per share. The hike represents the 25th straight year of dividend increase by the company. Albemarle also paid dividend worth around $113 million to its shareholders during the first nine months of 2019.

Albemarle is seeing pricing pressure for both lithium carbonate and hydroxide in specific markets, especially in China, as witnessed in the third quarter of 2019. Lithium prices remain under pressure amid oversupply of the white metal in the market. According to the company, lithium supply capacity grew faster than demand last year, leading to oversupply in the market. This has caused a sharp decline in lithium prices.

The company, in its third-quarter call, noted that it expects global pricing weakness to continue in the fourth quarter as well as in 2020. It envisions price pressure along with the use of tollers to meet customer commitments and address operating issues in Chile, to lead to lower-than-expected performance in its Lithium unit in the fourth quarter.  Amid the challenging environment, Albemarle initiated a cost management program which it expects to deliver more than $100 million in savings over a two-year period.

Albemarle is also exposed to currency headwinds. Unfavorable currency swings, stemming from a stronger dollar, impacted its sales by $7.6 million in the last reported quarter. Unfavorable impact on sales for the Lithium unit was $3 million in the quarter. Impact for Bromine and Catalysts units were $1.3 million and $3.2 million, respectively. Currency headwind will likely continue to impact its fourth- quarter results.

Daqo New Energy has projected earnings growth rate of 294.7% for 2020. The company’s shares have rallied roughly 105% in a year’s time.

Pan American Silver has estimated earnings growth rate of 38.1% for 2020. The company’s shares have shot up roughly 55% in a year’s time.

Sibanye Gold has projected earnings growth rate of 587.5% for 2020. The company’s shares have surged around 248% over a year.

Things to Note Ahead of Helen of Troy's (HELE) Q3 Earnings