Here's Why You Should Hold on to Phibro (PAHC) Stock Now

Phibro Animal Health Corporation (PAHC - Free Report) has been progressing well with its steady foray into overseas markets and expansion of product portfolio. However, a tough competitive landscape and foreign exchange uncertainties are likely to offset the positives to some extent.

This $1.03-billion worth animal health and mineral nutrition company expects an earnings growth rate of 3.2% for the next five years. Also, the company has a trailing four-quarter negative earnings surprise of 8.2%, on average.

In the past three months, the company’s shares have outperformed the industry. The stock has rallied 18.3% compared with the industry’s 4.9% growth.

Diversified Product Portfolio: Phibro’s key animal health products, including MFAs and nutritional specialty products, are expected to continue driving growth in the long term. The company’s leading product franchise, Stafac/V-Max/Eskalin, is approved in more than 30 countries for use in poultry and swine and regarded as one of the leading MFA products for livestock. Similarly, the company’s nutritional product offerings, such as OmniGen-AF, are being used increasingly in the global dairy industry. 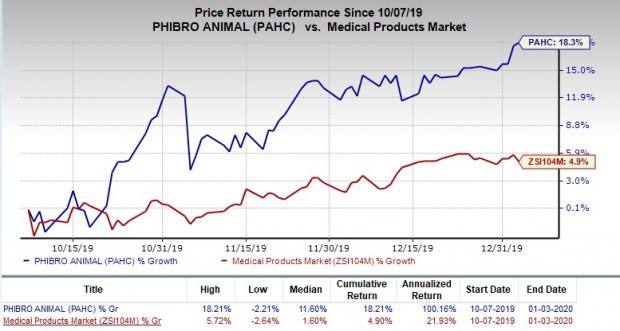 Prospering Vaccine Business: Lately, Phibro has been inking deals with various companies to bolster its vaccine business. In December 2018, the company bought the assets of KoVax, an Israel-based developer and manufacturer of vaccines for the international aquaculture market. The buyout has widened Phibro’s portfolio of aquaculture products.

However, a few factors are affecting the company’s growth.

Foreign Exchange Uncertainties: Phibro conducts operations globally, which entails transactions in various currencies. The company is subject to currency risk to the extent that its costs are denominated in currencies other than those in which the company earns revenues. It is also exposed to changes in the cost of goods sold resulting from currency movements and may not be able to adjust its selling prices to offset such movements.

For the first quarter of fiscal 2020, the Zacks Consensus Estimate is pegged at 28 cents, calling for a 31.1% decline from the prior-year reported number.

Haemonetics has a projected long-term earnings growth rate of 13.5%.

Omnicell has a long-term earnings growth rate of 12.5%.