Here's How to Play Stocks as US-Iran Tensions Mount

Over the weekend, Iran and the United States traded threats after a top Iranian general was killed in a U.S. airstrike at Baghdad’s airport. Iran confirmed that it won’t any longer abide by the limits contained in the 2015 nuclear deal. Iraq’s Parliament has also asked for the removal of all American troops from Iranian soil.

Intensifying of the Middle-East conflict has undoubtedly affected the U.S. stock market. While all the major benchmarks ended in the red on Jan 3, the Dow in particular registered its worst day in four weeks. And expectations that Iran may retaliate may lead to further volatility in the market in the near term.

But stock market investors shouldn’t panic at all. Let’s admit, Friday’s losses didn’t even erase Thursday’s gains. Needless to say, stocks have been on a tear last year, with major bourses hitting a series of record highs. And 2020 is surely building hopes, thanks to improving economic data, U.S.-China trade truce and USMCA trade deal to replace NAFTA.

What’s more, historically, the broader stock market’s average return has mostly been positive in the 12 months following any geopolitical uncertainty. Take a look — 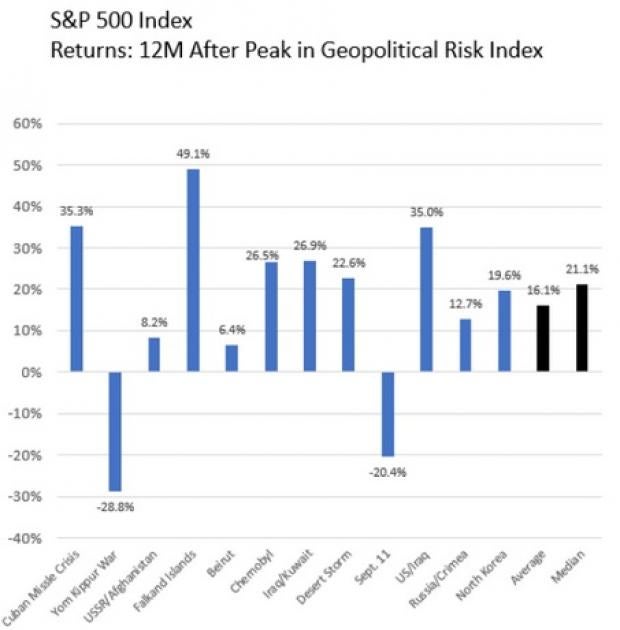 In such a scenario, investing in low-beta companies seems prudent. Since we do expect at least short-term volatility, low-beta stocks are the best choice as they are less correlated to the index and thus tend to be less volatile. In this case, a low beta ranges from 0 to 1.

But eventually, the broader market will start gaining, which calls for investing in stocks that also have the propensity to grow in the near term. This way, an investor can earn risk-adjusted returns. Hence, some of the best choices are as follows —

Agile Therapeutics, Inc. AGRX focuses on the development and commercialization of prescription contraceptive products for women. The company currently has a Zacks Rank #2 (Buy) and a beta of 0.75. At the same time, the company’s expected earnings growth rate for the current year is 37.9%, more than the Medical - Generic Drugs industry’s projected rise of 12.3%.

Ares Capital Corporation ARCC is a business development company specializing in acquisition, recapitalization, mezzanine debt, restructurings, rescue financing, and leveraged buyout transactions of middle market companies. The company currently has a Zacks Rank 2 and a beta of 0.58. In fact, the company’s expected earnings growth rate for the current year is 13.1% versus the Financial - SBIC & Commercial industry’s estimated rise of 0.5%.

Cable One, Inc. CABO owns and operates cable systems that provide data, video, and voice services. The company currently has a Zacks Rank #1 (Strong Buy) and a beta of 0.43. Also, the company’s expected earnings growth rate for the current year is 9.1%, more than the Cable Television industry’s projected rise of 3.1%. You can see the complete list of today’s Zacks #1 Rank stocks here.

Fears of retaliation following the top Iranian commander’s death have lifted oil prices. After all, any threat could affect supplies of crude oil through the Strait of Hormuz. Nearly 22.5 million barrels of oil pass through the Strait of Hormuz each day since the beginning of 2018, which is roughly 24% of the world’s daily oil production. So, any disruption can lead to supply-demand disparity, eventually leading to elevated oil prices.

West Texas Intermediate crude was up almost 2% late Sunday, while the global benchmark, Brent crude inched past the $70-a-barrel mark. And with oil prices going up, shares of energy players including bigwig oil producers, rig operators and pipeline owners have followed suit.

Hence, adding a solid energy player to your portfolio that can make the most of this bullish oil market seems judicious.

Notable among them is Evolution Petroleum Corporation EPM that engages in the development, production, ownership, and management of oil and gas properties in the United States. The company has a Zacks Rank 2. To top it, the company, which is part of the Oil and Gas - Exploration and Production - United States industry, is expected to post healthy earnings growth of 14.3% in the next quarter.

Prominent gold mining company in the United States is Royal Gold, Inc. (RGLD - Free Report) . The company currently has a Zacks Rank 2. The company’s expected earnings growth rate for the current year is almost 69%, higher than the Mining - Gold industry’s projected rise of 20.8%.

Yandex to Up the Ante With Self Driving Demonstrations at CES