Is Meritage Homes a Better Housing Stock Than Taylor Morrison?

Among the industry bellwethers, let’s check out whether Meritage Homes or Taylor Morrison is a more profitable pick for investors right now. Notably, both the companies are almost neck to neck in terms of market cap and carry a Zacks Rank #3 (Hold). You can see the complete list of today’s Zacks #1 Rank (Strong Buy) stocks here.

Let’s delve deeper into both the company’s growth and profitability measures.

What Defines the Stocks?

Meritage Homes — having a market cap of $2.37 billion — engages in building and selling single-family homes for entry-level, first-time and move-up buyers in historically high-growth regions of the United States. The company’s successful execution of strategic initiatives to boost profitability and focus on entry-level LiVE.NOW homes — which address the need for lower-priced homes — is expected to yield higher absorptions, aided by an improving community count growth trajectory.

Conversely, Taylor Morrison — with a market cap of $2.33 billion — offers a diverse assortment of homes across a wide range of price points for entry-level, move-up, luxury and active adult buyers. The company designs, builds and sells single and multi-family attached and detached homes. Notably, it operates under Taylor Morrison and Darling Homes brands. The company has been benefiting from buyouts, strategic initiatives to boost profitability and building homes on a spec basis. Not only its customer-centric approach is encouraging, but also investment in land acquisition should drive growth. 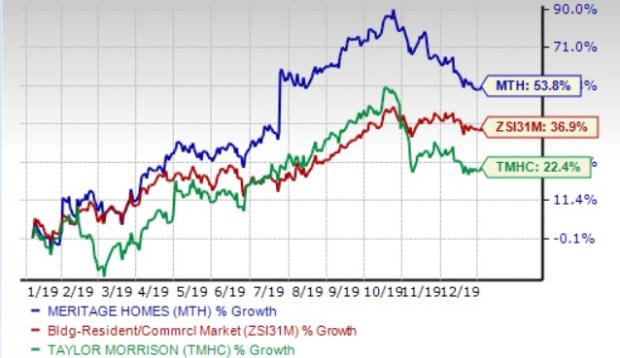 Analysts expect Meritage Homes’ earnings to grow 19.1% year over year in 2020. Taylor Morrison’s bottom line for the year is likely to rise 13.5%. Meanwhile, considering a more comprehensive earnings history, Meritage Homes delivered a positive surprise in 15 of the last 16 quarters, while Taylor Morrison came up with positive surprises in 13 of the trailing 16 quarters.

Hence, Meritage Homes is a clear winner in terms of earnings growth expectation and surprise history.

Return on Capital of Meritage Homes is 7.2%, while that of Taylor Morrison and the industry is 6.6% and 8.9%, respectively.

Return on Equity in the trailing 12 months for Meritage Homes is 12.4%, while that of Taylor Morrison is 12.5%. Markedly, both the companies provide lower returns to investors compared with the industry’s 13.8%.

A Look at the Stocks’ Valuation

Trailing 12-month price-to-sales (P/S) for Meritage Homes and Taylor Morrison is 0.62 and 0.47, respectively, compared with the industry’s 0.96.

After having a look at these valuation metrics, we can say that Taylor Morrison is the cheaper of the two stocks.

With the help of the above-mentioned factors, we can come to the conclusion that Meritage Homes certainly has an edge over Taylor Morrison in terms of earnings growth, stock performance and surprise history.

Here's Why You Should Hold on to Dunkin' Brands for Now