In an effort to expand network connectivity of all Internet-connected devices within a household, NETGEAR, Inc. NTGR recently added Orbi 4G LTE WiFi Router to its much acclaimed Orbi portfolio. The move has been primarily undertaken to make the Orbi technology more accessible to a broader spectrum of audience.

Demonstrated at CES 2020, the high-tech router has been specifically designed to provide uninterrupted WiFi connection with speeds up to 1.2 Gbps and coverage of up to 2,000 square feet. Its expandable mesh architecture is compatible with Orbi AC satellites, which facilitates consistent and flawless 4K streaming and gaming applications. Backed by a robust cellular network, the WiFi router is compatible with major 4G LTE service providers. It works by inserting a SIM card in order to establish LTE high-speed WiFi.

Apart from its mesh networking features like enhanced coverage and seamless roaming, the Orbi router is equipped with Smart Parenting Control solution, Circle and NETGEAR Armor. Circle incorporates a smart technology to manage screen time. It can be easily controlled with Amazon Alexa, the virtual assistant developed by Amazon.com, Inc. (AMZN - Free Report) , and Google Assistant, an AI-powered virtual assistant developed by Alphabet Inc. GOOGL, to provide voice control across the home network. NETGEAR Armor, which is a cybersecurity solution, provides industry-leading anti-virus and data theft protection for computers and smartphones. It also sends instant notifications through the Orbi app whenever it detects the presence of malicious Internet threats in Orbi home network.

The networking technology behemoth is benefiting from the healthy market traction of Orbi, cable modems and gateways coupled with its SMB switching portfolio, particularly the PoE and ProAV switches. It continues to capitalize on technology inflections, create new categories and generate recurring revenues to sustain its leading market position and drive growth. The company expects to significantly benefit from new product initiations on the back of Wi-Fi 6 standards alongside the world’s first millimeter wave 5G device with AT&T Inc. T.

NETGEAR’s top line is growing due to the rapid surge in Internet-connected devices, thereby boosting the need for robust networking solutions. An increased market demand for Smart Home and connected products such as Smart TVs, game consoles, HD streaming players and security cameras, among others, continues to drive innovation in the networking space. Notably, it generates a significant portion of its revenues from the Connected Home segment that offers high-performance, dependable and easy-to-use LTE and WiFi Internet networking solutions for consumers. The latest addition to the Orbi portfolio is likely to strengthen its market position and further augment revenues. 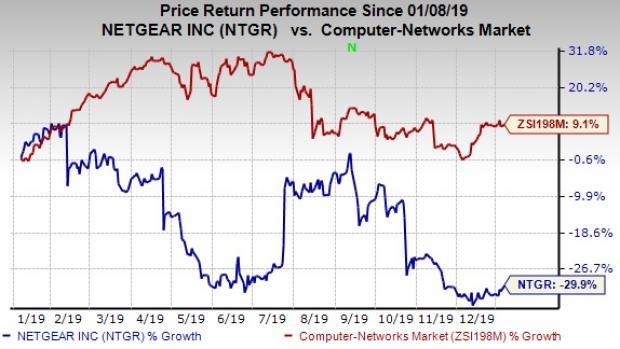