Also, the Zacks Consensus Estimate for its current-year earnings has been revised marginally upward over the past 30 days, reflecting analysts’ optimism regarding its earnings growth potential.

Looking at its price performance, shares of the company have gained 9% over the past six months, outperforming 7% growth recorded by the industry. 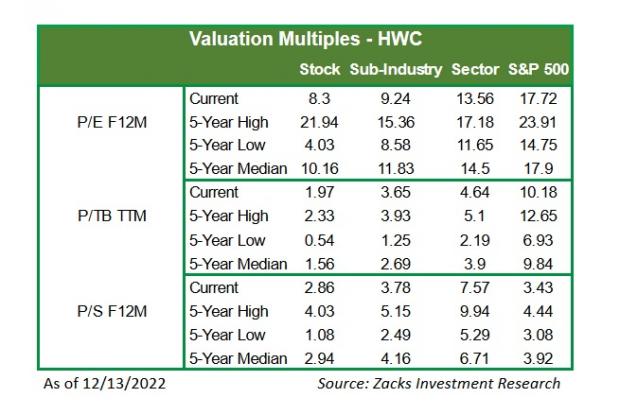 However, pressure on margins due to relatively lower interest rates along with mounting operating expenses will likely hamper its profitability. Thus, Hancock Whitney currently carries a Zacks Rank #3 (Hold).

The company’s net revenues (on a tax-equivalent basis) have witnessed a CAGR of 6.5% over the last five years (2014-2018). Given the implementation of initiatives to boost core revenues, the uptrend is expected to continue in the near term. The company’s strategic investments in growth markets are not only expected to be accretive to earnings but will also bolster the bank’s presence in such areas.

Further, the acquisition of MidSouth Bancorp is expected to be accretive to earnings in 2020. Also, the company expects to maintain its dividend payout ratio between 30% and 40% of net income, going forward. In fact, given a solid liquidity position and a debt/equity ratio lower than the industry, Hancock Whitney will be able to sustain the current level of capital-deployment actions, thus, continuing to enhance shareholder value.

However, because of the Federal Reserve’s accommodative monetary policy, the company’s net interest margin (NIM) might remain under pressure in the quarters ahead. Though its NIM (tax-equivalent) improved in the first nine months of 2019, the same declined to 3.38% in 2018 from 3.43% in 2017.

Moreover, the company’s total non-interest expenses (excluding non-operating expenses) have increased at a four-year (2015-2018) CAGR of 4.4% mainly due to rise in personnel costs and other operating expenses. While the acquisition of MidSouth Bancorp is expected to result in significant cost savings, Hancock Whitney’s continued efforts to expand inorganically and hire additional workforce will likely keep costs elevated in the near term. This might hurt the bottom line to an extent.

Further, the company’s significant exposure to residential mortgage, construction and land development as well as commercial real estate loans remains a concern. As of Sep 30, 2019, its exposure to these loan portfolios constituted 34.5% of total loans. Though the housing sector is improving, any future deterioration in the real estate prices will pose a risk for the company.

A few better-ranked stocks from the finance space are mentioned below. All these stocks currently carry a Zacks Rank #2 (Buy). You can see the complete list of today’s Zacks #1 Rank (Strong Buy) stocks here.

The Zacks Consensus Estimate for earnings of T. Rowe Price TROW has moved 1.1% upward for 2020 over the past 60 days. Shares of the company have gained 16.6% over the past three months.

The consensus estimate for earnings of Synovus Financial Corp. SNV has been unchanged for 2020 over the past 60 days. Its share price has increased 15.9% over the past three months.

The consensus estimate for Federated Investors, Inc FII has been revised 1.8% upward for 2020 over the past 60 days. The company’s share price has rallied 5.2% over the past three months.