Iran and the United States recently traded threats after a top Iranian general was killed in a U.S. airstrike at Baghdad’s airport. Iran confirmed that it won’t any longer abide by the limits contained in the 2015 nuclear deal. Iran also fired a series of ballistic missiles at two military camps in Iraq housing American troops.

Intensifying of the Middle-East conflict had undoubtedly raised investors’ concerns. But stock market investors shouldn’t have panicked at all in the first place. This is because, historically, the broader stock market’s average return has mostly been positive in the 12 months following any geopolitical unrest. 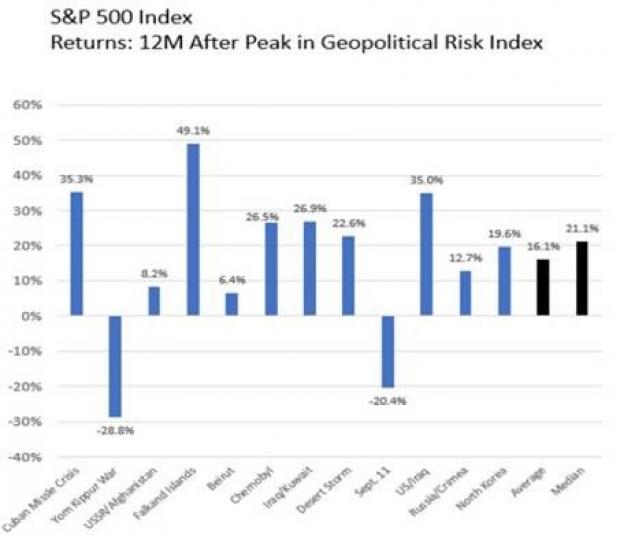 What’s more, Trump said during an afternoon speech yesterday that he wasn’t expecting any further retaliation from Tehran, and confirmed that the missiles fired by Iran at U.S. military bases did no harm. He added that “all of our soldiers are safe and only minimal damage was sustained at our military bases.” To top it, he said “Iran appears to be standing down, which is a good thing for all parties concerned and a very good thing for the world.”

The less hostile stance adopted by Trump, in fact, helped the major U.S. bourses climb north in the last trading session. While the S&P 500 and the Nasdaq hit intra-day record highs, the Dow is now close to breaking the coveted 29,000 level.

And 2020 is surely building hopes of a stock market rally, thanks to the U.S.-China trade truce and improving economic data. Trump had announced a possible “phase one” partial deal with China. And if the negotiations go well at the beginning of 2020, business confidence will improve, driving capital expenditure and in turn stocks.

And as consumer outlays remain healthy, led by record low unemployment rate, investors should expect the economy to continue to expand this year. By the way, the current low interest environment should make the cost of borrowing manageable, helping companies invest and grow. This in turn should help the economy gain momentum.

The Fed is widely expected to keep its monetary policy on hold after trimming rates three consecutive times last year to stimulate the economy. Fed Chair Jerome Powell had said that there is no immediate need to increase the federal fund’s rate unless there is a constant rise in inflation.

Coming back to geopolitical unrests, analysts at LPL Financial confirmed that the S&P 500 had declined an average 5% in 20 major geopolitical events dating back to the attack on Pearl Harbor. But the broader index recovered the entire loss in fewer than 50 days following such events. Take a look at the chart that shows market’s resilience to such turmoil — 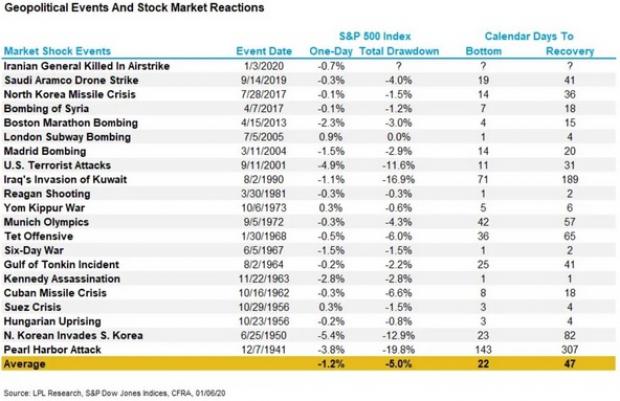 Given the times, it will be prudent to invest in multibagger stocks as these companies will cash in on positive developments and yield returns that are several times their cost. These stocks can make the most of the bull run, courtesy of strong fundamentals and businesses that can multiply in a short span of time. And the multibagger term was coined by legendary investor Peter Lynch. He is known for investing in fast-growing companies that are increasing their profit margins at a faster pace than peers (read more: 4 Stocks Peter Lynch Would Love for 2020).

We have, thus, selected five such stocks that flaunt a Zacks Rank #1 (Strong Buy) or 2 (Buy).

Agile Therapeutics, Inc. (AGRX - Free Report) , a women's healthcare company, focuses on the development and commercialization of prescription contraceptive products for women. Shares of Agile Therapeutics have already gained a staggering 270.8% over the past year. In fact, the company’s expected earnings growth for the current year is 37.9%, higher than the Medical - Generic Drugs industry’s projected rise of 12.4%. The company currently has a Zacks Rank #2.

Air Industries Group (AIRI - Free Report) , an aerospace and defense company, designs, manufactures, and sells structural parts and assemblies that focus on flight safety. Shares of Air Industries have gained a whopping 201.5% over the past year. In fact, the company’s expected earnings growth for the next quarter is 133.3% versus the Aerospace - Defense industry’s estimated decline of 1.8%. The company currently has a Zacks Rank #2.

Dermira, Inc. (DERM - Free Report) , a biopharmaceutical company, develops and commercializes therapies for patients with dermatologic diseases in the United States. Shares of Dermira have already gained a solid 136.9% over the past one-year period. In fact, the company’s expected earnings growth for the current year is 19.7%, higher than the Medical - Drugs industry’s projected rise of 9.5%. The company currently has a Zacks Rank #2. You can see the complete list of today’s Zacks #1 Rank stocks here.

Microbot Medical Inc. (MBOT - Free Report) researches, designs and develops micro-robotics assisted medical technologies targeting the minimally-invasive surgery space. Microbot Medical’s stock has already gained a superb 402.6% over the past year. In fact, the company’s expected earnings growth for the current year is 31.1% versus the Medical - Instruments industry’s projected rise of 11.3%. The company currently has a Zacks Rank #2.

Cassava Sciences, Inc. (SAVA - Free Report) , a clinical-stage drug development company, develops drugs for nervous system disorders. Shares of Cassava Sciences have gained a stellar 711.3% over the past year. In fact, the company’s expected earnings growth for the current year is 47.5%, higher than the Medical - Drugs industry’s estimated rise of 9.5%. The company currently has a Zacks Rank #1.