Netflix NFLX has dominated the streaming market in the past decade. Backed by a solid content portfolio, which included an attractive slate of original productions as well as regional shows, the company’s shares returned a humongous 4560.8% during the same time frame.

However, streaming markets’ evolution along with changing consumer preferences for binge watching, popularized by Netflix, has opened up the market for other companies/platforms in the last couple of years. With new players, both content providers and device manufacturers, entering the space, the streaming market is sure to get much more competitive in 2020.

TiVo TIVO is the latest tech provider to join the crowded streaming market, which saw a slew of announcements in the last few months. 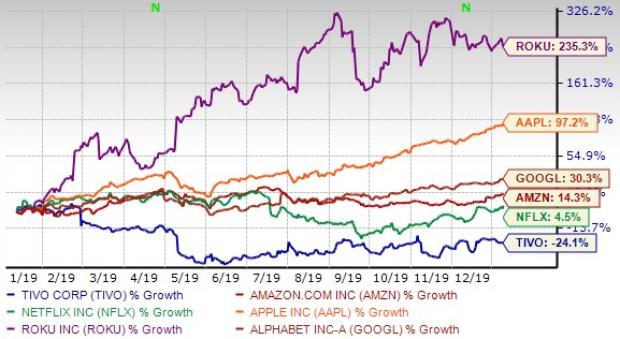 Additionally, there are no TiVo service fees for recording TV, which is a key positive.

However, TiVo’s interface is very much like that of Roku’s Streaming Stick, Apple TV and Fire TV, which also enable viewers to search directly for content and then open it in the relevant app.

We believe that the TiVo Stream 4k, which is expected to hit the shelves in April this year, still lags Roku in the streaming devices space. Roku is still at the top of the streaming devices market with the most streaming apps and a simpler interface. At $50, the Roku Streaming Stick Plus is one of the cheapest streaming TV with 4K HDR, whereas the Apple TV 4K and NVIDIA’s Nvidia Shield charge $180 and $150, respectively.

When it comes to value options among the sub-$100, Roku and TiVo compete with Amazon’s Fire TV 4K ($50). The best feature of the device is that it can be controlled with Alexa. In this area, Roku is also not very far behind as it works with Google Assistant. However, Roku’s Google Assistant can't control Netflix, unlike Alexa.

Among the sub-$100 competitors, Google Chromecast Ultra is another player. However, it doesn't have a separate remote or Amazon Video, which puts Roku, TiVo and the others discussed above in a better competitive position.

Keeping this projection in mind, we believe that TiVo, along with other market bellwethers, is poised to benefit from the growing streaming devices space.