Air Products and Chemicals, Inc. (APD - Free Report) has announced its largest investment so far in the United States. The company has won a long-term onsite business model supply deal for a project with Gulf Coast Ammonia (“GCA”) in Texas City, TX.

Per the agreement, Air Products will build, own and operate its steam methane reformer (SMR) to produce hydrogen. This will be Air Products’ largest SMR that will be connected and extend nearly 700 miles to its existing hydrogen pipeline system in the Gulf Coast.

Per Air Products, the overall project is worth $500 million and sets a new high for Air Products' investment related to one project in the United States. The project showcases the company’s core strengths and capabilities for supplying nitrogen from an ASU and hydrogen from an SMR.

Notably, the pipeline section of the project that will carry hydrogen to Texas City is expected to come onstream in second-half 2021. The remaining facilities are expected to be commercially operational in early 2023.

The hydrogen production facility will mark the latest technology to reduce emissions, maximize energy efficiency. It will also include optimal heat integration that lowers feedstock consumption.

The SMR will include the addition of more than 30 miles of hydrogen pipeline from Texas City to Baytown, which will be connected to Air Products' Gulf Coast Pipeline system. Also, the GCA project will use hydrogen from the SMR and Gulf Coast Pipeline.

The ammonia facility of GCA will produce around 3,600 metric tons per day of ammonia. It will also benefit from Air Products' supply of nitrogen from the new ASU that will be built and operated by the company at the Texas City site on property leased from Eastman Chemical Company EMN. Eastman Chemical acquired the Texas City site in August 2011 by purchasing Sterling Chemical, Inc. Notably, Eastman Chemical has rights to buy some of the ammonia and will provide several site-oriented services to Air Products and GCA.

Air Products stated that hydrogen customers will witness a value-addition in product supply reliability through the new SMR facility. The nearly 700-mile hydrogen pipeline system will span from Texas City through the Houston Ship Channel to New Orleans, LA. It will supply customers with more than 1.7 billion feet of hydrogen per day from 24 hydrogen production facilities.

Pipelines offer a strong, safe and reliable means of supplying hydrogen to refineries and petrochemical producers across the globe. In addition to the Gulf Coast Pipeline, the company has hydrogen pipelines in California as well as in Sarnia, Ontario, Canada and in Rotterdam, the Netherlands.

Air Products’ shares have rallied 48.6% in the past year against the industry’s 22.9% decline. 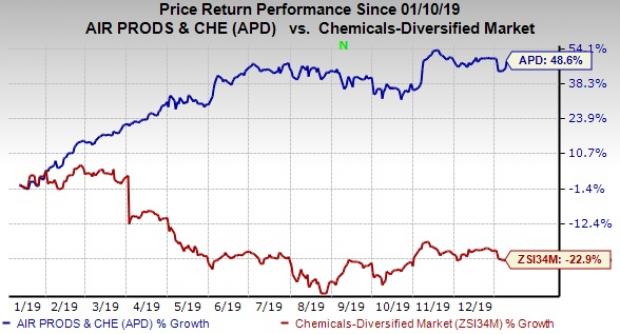 Some other top-ranked stocks in the basic materials space are Daqo New Energy Corp DQ and Commercial Metals Company CMC, both currently sporting a Zacks Rank #1 (Strong Buy). You can see the complete list of today’s Zacks #1 Rank stocks here.

Commercial Metals has an expected earnings growth rate of 18.3% for fiscal 2020. The company’s shares have rallied 41.9% in the past year.