The majority of the work related to the deal will be performed in Seattle, WA and Oklahoma City, OK. The deal, expected to be completed by September 2021, will serve the U.S. Navy and Australia.

Boeing's P-8A is an aircraft designed for long-range anti-submarine warfare, anti-surface warfare, maritime surveillance and reconnaissance missions, capable of broad-area maritime and littoral operations. It is also effective at search and rescue missions.

Being one of the major players in the defense business, Boeing stands out among its peers by virtue of its broadly diversified programs, strong order bookings and solid backlog. During third-quarter 2019, its defense segment — Boeing Defense, Space & Security (BDS) — witnessed solid top-line growth, courtesy of increased weapons deliveries. We believe that the latest contract win along with other notable ones in recent times will help the BDS segment to consistently deliver solid performances in the upcoming quarters.

In particular, among other defense equipment, Boeing’s strength lies in the development of combat-proven aircraft such as the P-8A Poseidon. Additionally, the company has started developing military aerial refueling and strategic transport aircraft for its fixed-wing military aircraft programs. These developments should support this aerospace giant’s growth, considering the increasing defense spending provisions made by the current U.S. administration. 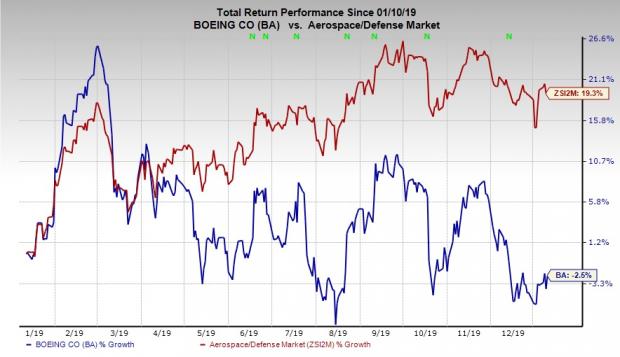 Leidos Holdings delivered average positive earnings surprise of 6.81% in the last four quarters. The Zacks Consensus Estimate for 2019 earnings has moved 1.1% up to $4.58 over the past 60 days.

Lockheed Martin delivered average positive earnings surprise of 17.35% in the trailing four quarters. The Zacks Consensus Estimate for 2019 earnings has climbed 4.7% to $20.41 over the past 90 days.

L3Harris Technologies delivered a positive earnings surprise of 5.02%, on average, in the last four quarters. The Zacks Consensus Estimate for 2020 earnings has climbed 6.6% over the past 90 days.