Aerospace parts makers and suppliers, Hexcel Corporation (HXL - Free Report) and Woodward, Inc. (WWD - Free Report) , recently entered into an all-stock merger of equals agreement for providing premier, technology-rich integrated systems and services to the aerospace and industrial sectors. Post the merger, the new company will be named Woodward Hexcel, with more than $5 billion in revenues.

The combined company will be among the top independent aerospace and defense suppliers globally, in revenue terms.

A Brief Note on the Merger Announcement

Per the agreement terms, approved by the management of both companies, shareholders of Hexcel will receive a fixed exchange ratio of 0.625 shares of Woodward common stock for each share of Hexcel's common stock. Similarly, shareholders of Woodward will continue to own the same number of shares in the combined company, as owned immediately prior to the closing of the merger.

Rationale Behind the Merger

In recent times, rising focus on cost reduction, widespread competition, better defense budgetary funding and heightened control over production procedures have prompted the defense industry giants to engage in mergers and acquisitions. Thus, the latest merger comes well in time to counter the intensifying competition in the U.S. Aerospace sector.

Interestingly, last year we witnessed a series of mega mergers like the one between L3 Technologies and Harris Corp, while United Technologies and Raytheon are set to complete their merger this year.

How Will the Merger Benefit the New Company?

The merger between Woodward and Hexcel is poised to bring in several strategic and financial benefits, going ahead. The combined company is expected to be capitalized with a strong balance sheet, with significant free cash flow generation. The merger will provide opportunities to enhance the scale of operations and offer significant content for all key aerospace programs, with approximately $1 billion of free cash flow in the first full fiscal year.

Further, the combined company expects to spend approximately $250 million on research and development in the first full year, post the closing of the merger, and will have greater resources to invest in emerging technologies and accelerate innovation in aerodynamics, propulsion and energy efficiency.

Since, both companies are two of the biggest suppliers of aircraft giants, Boeing (BA - Free Report) and Airbus Group (EADSY - Free Report) , the merger will surely be beneficial for the combined company in catering to the increasing requirements of technologically advanced aircraft parts and systems.

In the past year, shares of Hexcel have gained 21.6% compared with the industry’s growth of 44.4%. 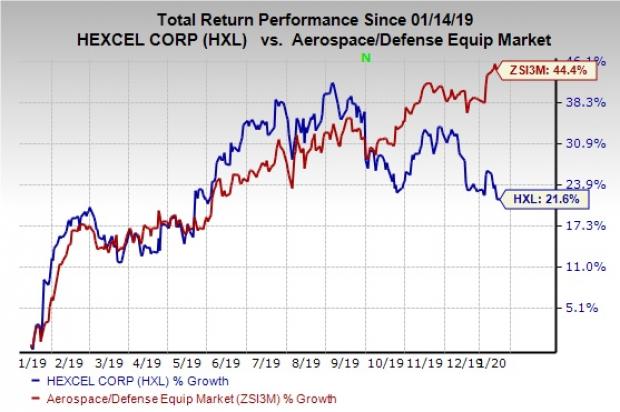