Lockheed Martin Cop. (LMT - Free Report) recently secured a multi-year contract from the U.S. Department of Defense for delivering 50 C-130J Super Hercules aircraft between 2021 and 2025. The jets will be manufactured at the company’s Marietta, GA, facility.

The contract, worth more than $3 billion, will serve the U.S. Air Force, Marine Corps and Coast Guard.

All C-130J variants are designed for night operations, while its proven on-board navigation system guides pilots to proper landing site quickly and safely. The Super Hercules worldwide fleet has more than 2 million flight hours and is the airlifter of choice for 20 nations.

In recent times, military helicopters in the U.S. aerospace-defense market have gained prominence and significant traction due to advancements and integration of new tactical, logistical and other important features. Some of these developments are attributable to Lockheed Martin and have paved the way for securing valuable helicopter-related contracts in recent times.
Such contracts are indicative of solid revenue growth prospects for the company’s Aeronautics business segment, which comprises C-130 Hercules program. Notably, during third-quarter 2019, revenues at this unit increased 10% year over year and we expect the upcoming quarterly reports to reflect similar growth on account of contract wins like the latest one.

With the fiscal 2020 defense budget offering investment potential worth $57.7 billion in aircraft, we may expect Lockheed Martin’s Aeronautics unit to receive consistent order flows from the Pentagon in the near future as well. This, in turn, should lead to top-line growth for the unit in the coming days.

In a year’s time, shares of Lockheed Martin have gained 24.2% compared with the industry’s 7.3% increase. 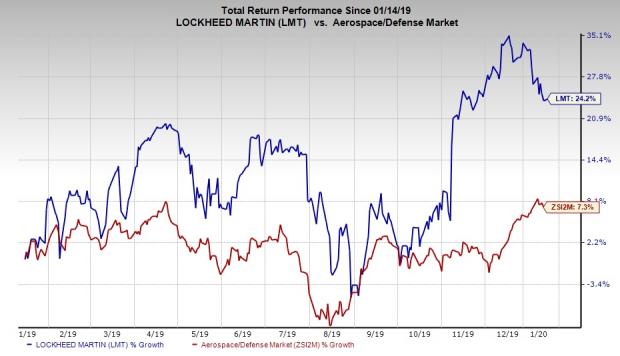 Leidos Holdings delivered average positive earnings surprise of 6.51% in the last four quarters. The Zacks Consensus Estimate for 2019 earnings has moved up 1.1% to $4.58 over the past 60 days.