Dave & Buster's Entertainment, Inc. (PLAY - Free Report) continues to focus on revival of existing stores, digitalization, investment in highest-return new locations and sales-building efforts. Although, the shares of Dave & Buster’s have lost 18.6% against the industry’s 20.9% growth. The aforementioned factors have helped the company’s shares gain 7% in the past three months. 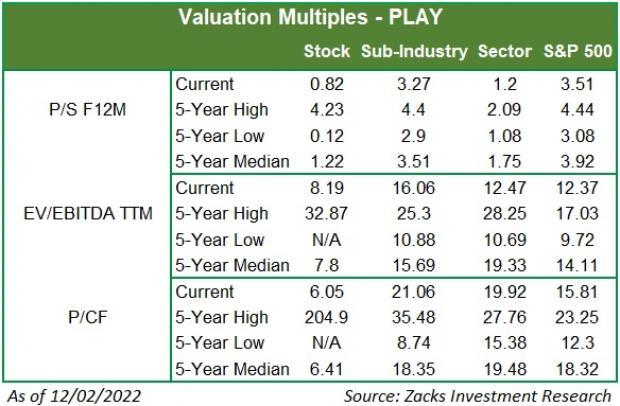 Unique Business Model: Apart from great food and beverages, Dave & Buster's entertainment business has been driving growth for a while.  Moreover, higher dependence on gaming has helped the company pare headwinds from consumer discretionary spending that characterizes the restaurant industry. Also, increased focus on amusement is driving earnings. Notably, the segment’s revenues increased 6.1% in the first three quarters of 2019. Furthermore, the company continues to evolve its amusement business on the back of new and riveting content — including games based on some of the world’s finest movie properties.

Store Growth Strategy: Dave & Buster's continues to pursue a disciplined new store growth strategy in new and existing markets, given the broad appeal of its brand. Management believes that it can expand the concept to more than 200 units in North America over time. Meanwhile, in addition to growth potential that exists in North America, management is optimistic about the brand’s significant appeal in certain international markets.

Sales Building Efforts: Menu innovation is a key growth catalyst of the brand and customers have responded favorably to menu additions. However, Dave & Buster’s streamlined its menu as well as reduced the number of food orders by about 20% and beverage offerings by 12%, to improve service.

The company is also on track to collaborate with various game manufacturing partners and remains steadfast on its strategy to include exclusive proprietary content. Given that amusements are the company’s strongest sales channel, it has increased its focus from a promotional standpoint.

Digitalization:  Dave & Buster's digital initiatives are likely to drive growth. The company believes that it can increase traffic by enhancing in-store and out-of-store customer experience via digital and mobile initiatives as well as through employing better technology. It intends to strengthen its growing loyalty database by investing in other mobile applications for building customer connections and driving frequent customer visitation.

Noodles & Company’s earnings surpassed estimates in three of the trailing four quarters, the average being 4.6%.