The New York Times Company (NYT - Free Report) has been making concerted efforts to lower dependency on traditional advertising and focus on digitization to adapt to the changing face of the multiplatform media universe. Rapid digitization in the core areas of advertising, subscriptions and sales, printing, and distribution services are turning out to be a major source of revenues.

Certainly, changing consumer preferences and innovative technologies have altered the way in which news is offered and consumed. Readers’ preference for accessing news online, mostly free, has made the industry’s print-advertising model increasingly redundant. As readers started thronging the Internet for news, advertisers followed suit, and so did the newspaper companies. 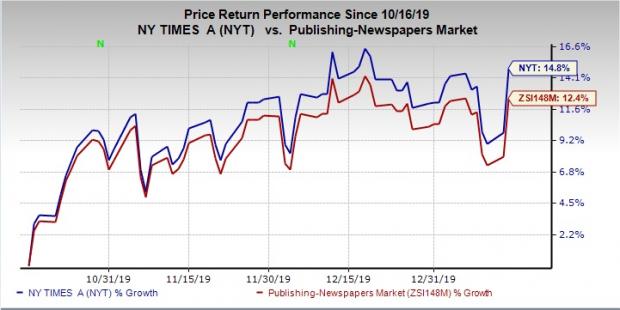 Following the news, shares of this Zacks Rank #3 (Hold) company have increased 4.6% during the trading session on Jan 14. Notably, the stock has gained 14.8% compared with industry’s growth of 8% in the past three months.

The New York Times Company has been diversifying business, adding new revenue streams, realigning cost structure and streamlining operations to increase efficiencies. The company is not only gearing up to become an optimum destination for news and information but is also focusing on lifestyle products and services.

3 Stocks That Deserve Your Attention

TEGNA Inc. TGNA, which sports a Zacks Rank #1 (Strong Buy), has a long-term earnings growth rate of 10%. You can see the complete list of today’s Zacks #1 Rank stocks here.

Grupo Televisa TV has a long-term earnings growth rate of 15.1%. The stock carries a Zacks Rank #2.

Here's Why You Should Retain Avery Dennison (AVY) Stock Now