Enphase Energy, Inc. ENPH recently announced its strategic partnership with OpenSolar to offer the value of its microinverters to customers. The alliance indicates Enphase’s attempt to expand its business in the Australian solar market through the OpenSolar App.

How Will the Deal Help?

The OpenSolar App is a software tool that provides complete proposal procedure from solar system design and sales to installation and service. Through the application, installers will gain sales efficiency and will be able to enhance customers’ experience. It also provides a paid bespoke-software service for the solar manufacturers and solar finance companies to better serve dealer networks.

This joint venture will enable Enphase Energy’s product installer in Australia — Total Solar Solutions — to offer visually attractive design proposals to customers for its state-of-the-art solar solutions. This will reflect the usefulness that Enphase’s inverters can offer, which will boost sales and profitability.

Realizing the need of emission-less environment and ample solar prospects, the Australian government is undertaking various initiatives to promote solar power. It is imperative to mention that Australian Renewable Energy Agency has provided more than $290 million to around 300 solar research and development projects. As of Sep 30, 2019, there are over 2.2 million PV installations in Australia with a combined capacity of over 13.9 gigawatts. Such developments have encouraged solar players like Enphase Energy to sign the partnership deal with OpenSolar and capture maximum shares in the expanding Australian solar market.

With similar intentions to benefit from growth in the Australian solar market, other companies are also making similar efforts.

For example, in January 2019, Canadian Solar (CSIQ - Free Report) announced that along with Signal Energy it will offer Engineering, Procurement and Constructions (EPC) services for the Darlington Point Solar Farm (DPSF) in New South Wales, Australia. In June 2018, JinkoSolar JKS announced that it has supplied 275.4 Megawatt-dc high-efficiency solar modules to Green Light Contractors to be installed in Australia’s Bungala solar project. In August 2017, First Solar FSLR won a contract from RCR Tomlinson Ltd to supply solar modules with a total capacity of 241 megawatt (MW). Per the deal, this company will act as the EPC contractor for Australian renewable energy group.

In a year’s time, shares of Enphase Energy have surged 352.1% compared with the industry’s growth of 65.9%. 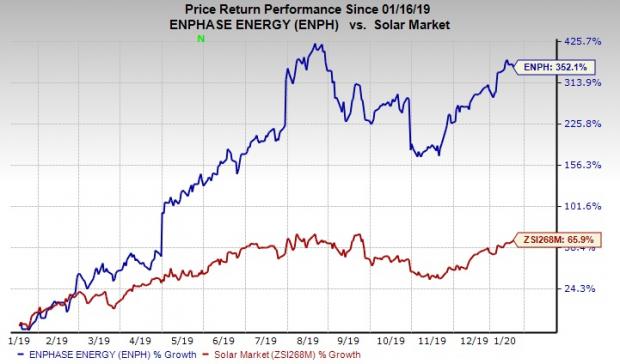