On Jan 15, President Donald Trump and Chinese vice premier Liu He signed an interim trade deal in the East Room of the White House. The much-hyped Phase-One trade deal was the first tangible sign of de-escalation in the nearly two-year long trade dispute between the two largest trading countries of the world. Notably, the U.S. energy sector is likely to be a major beneficiary of this temporary trade deal.

Per the deal, China has agreed to purchase $200 billion in U.S. goods over the next two years in addition to the total amount of China’s imports from the United States in 2017. Notably, the Asian economic super power procured $186 billion of U.S. goods and services in 2017.

Out of the new U.S. exports of $200 billion, products from the energy sector — including liquefied natural gas, crude oil, refined products and coal — will constitute $52.4 billion ($18.5 billion in 2020 and $33.9 billion in 2021). The energy sector will be the second-largest beneficiary after the diversified manufacturing sector, which will command $77.7 billion of U.S. exports in two years.

Moreover, a solution to the year-long tariff-related conflict between the United States and China will provide a major boost to crude oil price as it will reduce the likelihood of a global economic slowdown.

Although the final trade deal or the phase-two deal is unlikely to happen before the U.S. presidential election in November 2020, the interim deal will at least cool down the tariff war, which affected not only these two countries but also the Eurozone and several major emerging markets.

On Jan 14, the U.S. Energy Information Administration (EIA) raised its 2020 forecasts for both the U.S. benchmark West Texas Intermediate (WTI) and the global benchmark Brent crude oil prices. While WTI price is pegged at $59.25 a barrel, Brent price is forecast at $64.83. Estimated prices for both types of crude oil rose 7.7% and 7.1%, respectively, from EIA’s previous projection given just a month ago.

Recently, speaking at a CNBC-moderated panel at the International Petroleum Technology Conference (IPTC) in Saudi Arabia, Bahrain’s oil minister Sheikh Mohammed bin Khalifa Al Khalifa said that U.S. shale production, which has become the major source of global oil supply, may not maintain its momentum throughout 2020.

Meanwhile, the EIA revealed that although U.S. crude oil production will continue to rise in the next two years, its rate of growth has actually declined. On average, the WTI crude production is expected to increase 0.9 million barrels per day (bpd) in 2020 compared with 1.3 million bpd in 2019 and 1.6 million bpd in 2018.

Despite a surge in sales of electric cars, demand for oil is expected to rise in the petrochemical industry, especially in plastic industry. Also, growing demand for aviation oil will support crude oil prices.

At this stage, investment in stocks engaged in exploration and production of crude oil with a favorable Zacks Rank will be prudent. We have narrowed down our search to five oil stocks,  each carrying either a Zacks Rank #1 (Strong Buy) or 2 (Buy). You can see the complete list of today’s Zacks #1 Rank stocks here. 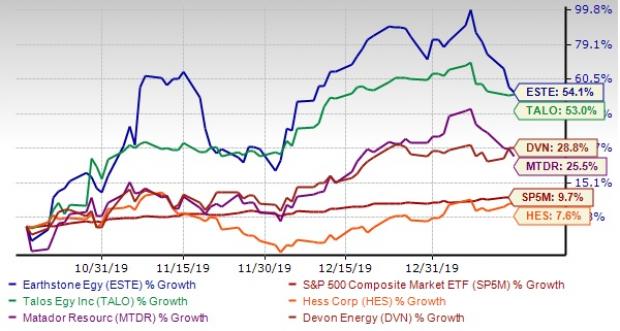 Earthstone Energy Inc. ESTE is engaged in the development and operation of oil and gas properties in the United States. Its asset portfolio includes the Midland Basin of west Texas and the Eagle Ford trend of south Texas. The Zacks Rank #1 company has an expected earnings growth rate of 13.9% for the current year. The Zacks Consensus Estimate for the current year has improved 11.8% over the past 60 days.

Talos Energy Inc. TALO is engaged in exploration, development and production of oil and natural gas properties. It operates primarily in the Gulf of Mexico and in the shallow waters off the coast of Mexico. The Zacks Rank #1 company has an expected earnings growth rate of 13.7% for the current year. The Zacks Consensus Estimate for the current year has improved 7.2% over the past 60 days.

Hess Corp. HES explores, develops, produces, purchases, transports, and sells crude oil, natural gas liquids and natural gas. It operates through two segments, Exploration and Production and Midstream. The Zacks Rank #2 company has an expected earnings growth rate of 90.9% for the current year. The Zacks Consensus Estimate for the current year has improved 81.1% over the past 60 days.

Devon Energy Corp. (DVN - Free Report) is primarily engaged in the exploration, development, and production of oil, natural gas and natural gas liquids in the United States and Canada. The Zacks Rank #2 company has an expected earnings growth rate of 43.7% for the current year. The Zacks Consensus Estimate for the current year has improved 26.7% over the past 60 days.

Matador Resources Co. MTDR is engaged in the exploration, development, production, and acquisition of oil and natural gas resources in the United States. It operates in two segments, Exploration and Production and Midstream. The Zacks Rank #2 company has an expected earnings growth rate of 26.9% for the current year. The Zacks Consensus Estimate for the current year has improved 9.6% over the past 60 days.