Shares of Google parent Alphabet Inc. (GOOGL - Free Report) have jumped 9% in 2020 to crush the S&P 500 and help it ascend into the $1 trillion market cap club, which it entered Thursday for the first time. The firm remains one of the most important and powerful companies in the world, sparking fear of government regulation.

Google went public back in 2004 and Alphabet was created in 2015 to separate its core search engine and digital advertising business from some of its more futuristic ventures such as self-driving car technology. Investors should note that there are two classes of shares, non-voting right GOOG (GOOG - Free Report) vs. GOOGL, which carry one vote each.

Sundar Pichai, who used to run Google took over as CEO of both Google and Alphabet. Pichai took over as Alphabet faces increased regulatory scrutiny and political backlash for its outsized control over the spread of information and other practices.

But it is this strength that makes the company so attractive to investors. Google currently controls over 70% of U.S. search advertising and 38% of total digital ad spending, well ahead of second-place Facebook (FB - Free Report) . The company has, of course, diversified its business to try to make more money outside of advertising, which currently accounts for roughly 84% of total revenue.

Alphabet has expanded its cloud computing reach, which includes a new cloud gaming service called Stadia that could prove to be a hit down the road in the $150 billion global gaming industry. Google also operates a cloud business on both an enterprise and consumer-facing level. And the firm continues to invest heavily in order to try to compete long-term alongside cloud giants Amazon and Microsoft. 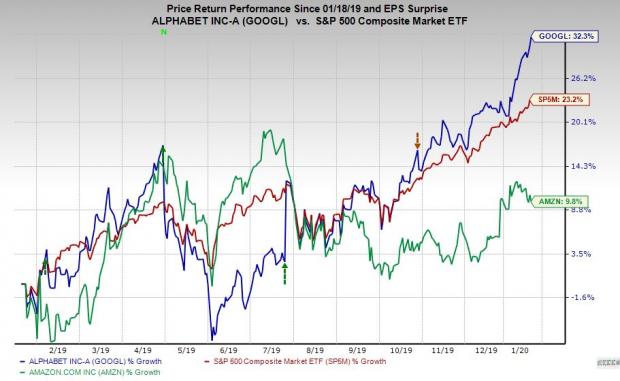 GOOGL stock has surged 28% in the last six months to crush the S&P 500’s 11%. The recent climb has pushed its valuation up. GOOGL is currently trading at 26.3X forward 12-month earnings estimates, which marks a premium compared to Apple and the S&P 500.

But investors have always been willing to pay a premium for Google shares against the iPhone giant and the index. Plus, Google has traded as high as 28X in the last 12-months and it rests no too far above its five-year median of 25.1X.

Wall Street also wonders, perhaps more than ever, if and when the company will pay a dividend. The firm is currently resting on a $117 billion pile of cash and its free cash flow is staggering.

On top of that, Deutsche Bank analysts recently raised their price target on Alphabet stock to $1,735 per share, pointing to the new CEO’s potentially “shareholder-friendly” approach. This would mark a roughly 20% increase from Thursday’s levels.

Google, which is set to report its Q4 financial results on February 3, is a Zacks Rank #2 (Buy) at the moment, based on its positive earnings revision activity. Some investors might want to wait for a pullback, but with the market cruising along for now—driven by Alphabet, Apple, and others—it’s unclear when that will be.