The U.S. economy is expanding for the last 11.5 years — the longest expansion historically. Since mid-2019, several economists have cautioned several times that the slowing pace of GDP growth and aging economic growth are likely to lead to a recession in 2020.

However, a series of economic data released in the last two trading days of the previous week allayed any such concern. Fabulous economic data confirms U.S. economic stability and clearly indicates that the expansionary phase is here to stay.

U.S. housing starts jumped 16.9% in December to a seasonally adjusted annual rate of 1.608 million units, reflecting the highest percentage gain since October 2016. November’s data was revised upward from 1.365 million units to 1.375 million units. Building permits fell slightly to 1.416 million units in December after hitting their highest level in more than 12.5 years in November.

Recovery of the housing market in 2019 after a pathetic 2018 was a major positive for the U.S. economy as the sector constitutes nearly 3.1% of GDP. Moreover, the National Association of Home Builders’ monthly confidence index came in at 75 in January, remaining near to the highest reading since 1999.

Low mortgage owing to three rate cuts by the Fed last year revived the housing market. Per the mortgage finance agency Freddie Mac, the 30-year fixed mortgage rate has dropped to an average of 3.65% in December 2019 from 4.94% in November 2018.

The recently signed phase-one trade deal between the United States and China has significantly cooled down the nearly two year old tariff war. Although a complete deal is not likely to be signed before the U.S. presidential election this November, the interim deal will at least help in restoring U.S. business confidence and global economic growth.

Moreover, Fed’s timey intervention with 75 basis point rate cut in 2019 boosted the economy and raised investors’ confidence. The Fed chair has reiterated his commitment to do whatever needed to support economic expansion and not raise interest rate until the inflation rate, which is currently at just 1.6%, crosses the Fed’s target level of 2%.

At this stage, it will be prudent to invest in stocks with a favorable Zacks Rank that skyrocketed in the past three months and still have strong growth potential. Although several stocks fit in the box, selecting the best ones may be difficult. Our VGM Score will come handy in this situation.

We have narrowed our search to five such stocks each carriying a Zacks Rank #1 (Strong Buy) and having a VGM Score of A. You can see the complete list of today’s Zacks #1 Rank stocks here. 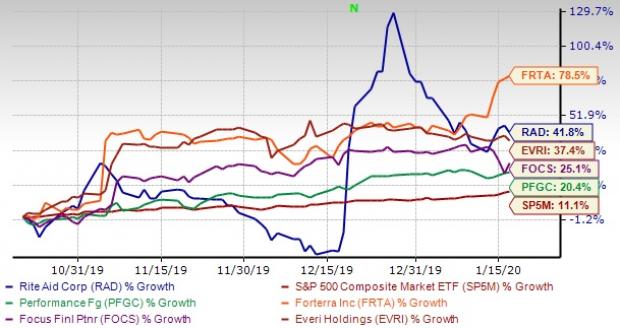 Forterra Inc. FRTA manufactures and sells pipe and precast products the United States, Canada, and Mexico. It operates through Drainage Pipe & Products and Water Pipe & Products segments. The company has an expected earnings growth rate of 680% for the current year. The Zacks Consensus Estimate for the current year has improved by 141.7% over the past 30 days. The stock has rallied 78.5% in the past three months.

Rite Aid Corp. (RAD - Free Report) operates a chain of retail drugstores in the United States. It operates through two segments, Retail Pharmacy and Pharmacy Services. The company has an expected earnings growth rate of 70.6% for the current year. The Zacks Consensus Estimate for the current year has improved by 566.7% over the past 30 days. The stock has jumped 41.8% in the past three months.

Everi Holdings Inc. EVRI provides technology solutions for the casino gaming industry in the United States, Europe, Canada, the Caribbean, Central America and Asia. It operates in two segments, Games and FinTech. The company has an expected earnings growth rate of 65.1% for the current year. The Zacks Consensus Estimate for the current year has improved by 1.8% over the past 30 days. The stock has soared 37.4% in the past three months.

Focus Financial Partners Inc. FOCS provides wealth management services to primarily high net worth individuals and families. It offers investment advice, financial and tax planning, consulting, tax return preparation, family office services and other services. The company has an expected earnings growth rate of 23.2% for the current year. The Zacks Consensus Estimate for the current year has improved by 0.4% over the past 30 days. The stock has climbed 25.1% in the past three months.

Performance Food Group Co. PFGC markets and distributes food and food-related products in the United States. It operates in two segments, Foodservice and Vistar. The company has an expected earnings growth rate of 13.5% for the current year. The Zacks Consensus Estimate for the current year has improved by 1.4% over the past 30 days. The stock has surged 20.4% in the past three months.

Natural Gas Falls to Lowest Since 2016: Has it Bottomed Out?