Freeport (FCX) to Post Q4 Earnings: What's in the Cards?

Freeport’s earnings surpassed the Zacks Consensus Estimate in one of the trailing four quarters, while missing in the other two and meeting the consensus mark once. It has a trailing four-quarter negative earnings surprise of 16.3%, on average.

Higher production and sales at the Cerro Verde on a sequential comparison basis are likely to get reflected in the company’s fourth-quarter results. Higher copper prices are also likely to make an impact on Freeport’s results in the to-be-reported quarter.

The stock has gained 2.5% in the past year compared with the industry’s 19.5% growth. 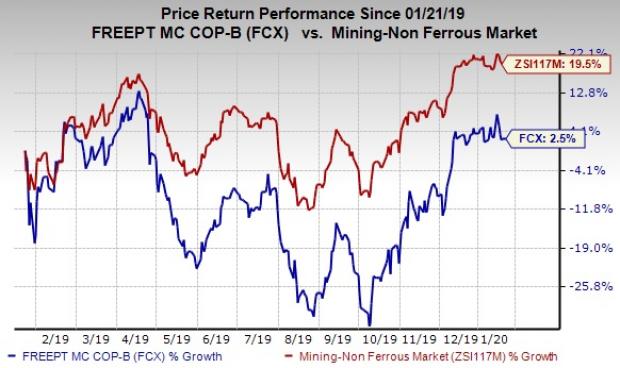 What to Expect in Q4

After a turbulent third quarter, copper prices had been on an upswing in the fourth quarter boosted by prospects of the United States-China trade pact. In fact, prices of the red metal surged to eight-month high in December 2019 on the announcement of the ‘phase one’ trade deal and anticipation of higher demand for the metal from China, following easing trade tensions. Strong copper import data from China coupled with the rebound in the country’s factory activity in November also contributed to the price gain in December. As such, some impact of higher copper prices is likely to get reflected on Freeport’s results in the December quarter.

The Zacks Consensus Estimate for Freeport’s fourth-quarter consolidated revenues is currently pegged at $3,791 million, which suggests a year-over-year rise of 2.9%.

The Zacks Consensus Estimate for consolidated net cash costs per pound of copper is currently pegged at $1.73, which indicates a sequential increase of 8.8% and 12.3% rise on a year-over-year basis.

The consensus mark for consolidated copper sales in the to-be-reported quarter is pegged at 864 million pounds, which calls for a rise of 8.7% and 10.1% on a sequential and year-over-year basis, respectively.

Our proven model doesn’t conclusively predict an earnings beat for Freeport this time around. The combination of a positive Earnings ESP and a Zacks Rank #1 (Strong Buy), 2 (Buy) or 3 (Hold) increases the chances of an earnings beat. But that’s not the case here.

Earnings ESP: Earnings ESP for Freeport is -549.91%. The Most Accurate Estimate and the Zacks Consensus Estimate are currently pegged at a loss of 1 cent and breakeven per share, respectively. You can uncover the best stocks to buy or sell before they’re reported with our Earnings ESP Filter.

Here are some companies in the basic materials space you may want to consider as our model shows that they have the right combination of elements to post earnings beat this quarter:

Bunge Limited BG, slated to released earnings on Feb 12, has an Earnings ESP of +18.18% and sports a Zacks Rank #1. You can see the complete list of today’s Zacks #1 Rank stocks here.

Cleveland-Cliffs Inc. CLF, scheduled to released earnings on Feb 27, has an Earnings ESP of +6.25% and carries a Zacks Rank #2.

LyondellBasell Industries N.V. LYB, scheduled to released earnings on Jan 31, has an Earnings ESP of +2.31% and carries a Zacks Rank #3.