Arconic (ARNC) Warms Up to Q4 Earnings: What's in Store?

Arconic Inc. (ARNC - Free Report) is scheduled to come up with fourth-quarter 2019 results before the opening bell on Jan 27. The company is likely to have benefited from strength across its key end-markets, higher pricing and its actions to reduce costs and improve operations in the quarter.

Arconic beat the Zacks Consensus Estimate for earnings in each of the trailing four quarters. In this timeframe, the company delivered an average positive surprise of around 10.7%.

Arconic's shares have rallied 62.7% over a year, outperforming the roughly 24.8% rise recorded by the industry. 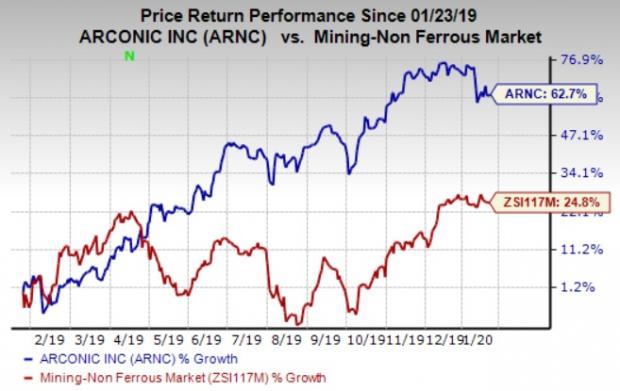 The Zacks Consensus Estimate for revenues for Arconic for the fourth quarter stands at $3,469 million, reflecting an expected year-over-year decline of 0.09%.

Some Factors to Consider

Arconic remains focused on cost reduction and operational improvements across its businesses. These actions are expected to have provided support to its bottom line in the December quarter.

The company, in November, raised the annualized cost reduction commitment to roughly $280 million on a run-rate basis, from its prior expectation of $260 million. It expects to capture around $180 million of savings for full-year 2019, also up from earlier commitment of $140 million. Benefits of net cost reductions are expected to get reflected on the company’s fourth-quarter operating profit.

The company is also expected to have gained from favorable pricing in the fourth quarter. It achieved year-over-year price improvement in the third quarter, marking the third straight quarter of price increase. The momentum is likely to have continued in the December quarter.

Moreover, higher volumes across major end-markets are likely to have contributed to organic revenue growth in the quarter to be reported. The company is expected to have benefited from strong demand across automotive and aerospace markets in the quarter.

Arconic is seeing healthy demand in aero engines and aero defense, as reflected by strong growth in organic revenues in these markets. Volume growth across these markets is likely to have contributed to its fourth-quarter performance.

However, the impact of divestiture of a number of businesses might reflect on fourth-quarter and full-year revenues. Arconic trimmed its revenue expectations for full-year 2019 factoring in the effects of divestments.

Our proven model doesn’t conclusively predict an earnings beat for Arconic this time around. The combination of a positive Earnings ESP and a Zacks Rank #1 (Strong Buy), 2 (Buy) or 3 (Hold) increases the chances of an earnings beat. But that’s not the case here.

Earnings ESP: Earnings ESP for Arconic is 0.00%. The Zacks Consensus Estimate for the fourth quarter currently stands at 54 cents. You can uncover the best stocks to buy or sell before they’re reported with our Earnings ESP Filter.

Here are some other companies in the basic materials space you may want to consider:

Bunge Limited BG, scheduled to release earnings on Feb 12, has an Earnings ESP of +18.18% and carries a Zacks Rank #1. You can see the complete list of today’s Zacks #1 Rank stocks here.

Royal Gold, Inc. RGLD, scheduled to release earnings on Feb 5, has an Earnings ESP of +1.01% and carries a Zacks Rank #1.

Cleveland-Cliffs Inc. CLF, scheduled to release earnings on Feb 27, has an Earnings ESP of +6.25% and carries a Zacks Rank #2.