AMD to Report Q4 Earnings: What's in the Cards for the Stock?

The Zacks Consensus Estimate for revenues stands at $2.10 billion, suggesting growth of 48.1% from the year-ago reported figure.

The Zacks Consensus Estimate for fourth-quarter earnings is pegged at 30 cents per share, unchanged over the last 30 days. The figure indicates an improvement of 275% from the year-ago quarter.

Notably, shares of AMD have returned 146.6% in the past year, significantly outperforming the industry’s rally of 48.3%. 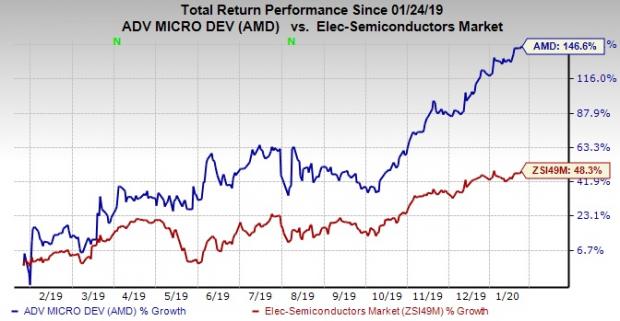 AMD had reported third-quarter 2019 non-GAAP earnings of 18 cents per share, which matched the Zacks Consensus Estimate. Notably, the figure improved 38.5% year over year.

Revenues of $1.801 billion missed the Zacks Consensus Estimate of $1.828 billion. However, the top line improved almost 9% year over year.

This momentum in latest EPYC processors is anticipated to have favored server revenue growth in the fourth quarter.

Moreover, incremental revenues generated from Radeon RX 5500 GPU, Athlon PRO processors integrated with Radeon Vega Graphics and Ryzen PRO 3000 Series desktop processors, is likely to have contributed to the top line in the quarter under review.

The aforementioned factors are likely to have driven revenues in the fourth quarter, amid anticipated sluggishness in Semi Custom vertical.

However, increasing expenses on product development amid stiff competition from NVIDIA and Intel is likely to have impeded margin expansion in the fourth quarter.

Our proven model doesn’t conclusively predict an earnings beat for Skyworks this time around. The combination of a positive Earnings ESP and a Zacks Rank #1 (Strong Buy), 2 (Buy) or 3 (Hold) increases the odds of an earnings beat. But that’s not the case here.

AMD has a Zacks Rank #3 and an Earnings ESP of 0.00%. You can uncover the best stocks to buy or sell before they’re reported with our Earnings ESP Filter.

Here are a few stocks which you may consider as our proven model shows that these have the right mix of elements to beat estimates this time around:

Advanced Energy Industries, Inc. (AEIS - Free Report) has an Earnings ESP of +10.80% and a Zacks Rank of 1. You can see the complete list of today’s Zacks #1 Rank stocks here.