Dow (DOW) Gears Up for Q4 Earnings: Is a Beat in the Cards?

Dow Inc. (DOW - Free Report) is scheduled to come up with its fourth-quarter 2019 results before the opening bell on Jan 29. The company’s earnings are likely to have benefited from cost synergy savings and its U.S. Gulf Coast investments. However, its fourth-quarter performance is expected to reflect demand weakness in certain industrial end markets and some unfavorable impacts of turnarounds across certain facilities.

The company delivered a positive earnings surprise of 26.4% in the last reported quarter. It had gained from its actions to reduce costs in the period.

Dow’s shares were down 0.5% in the past three months, compared with 1% rise recorded by the industry. 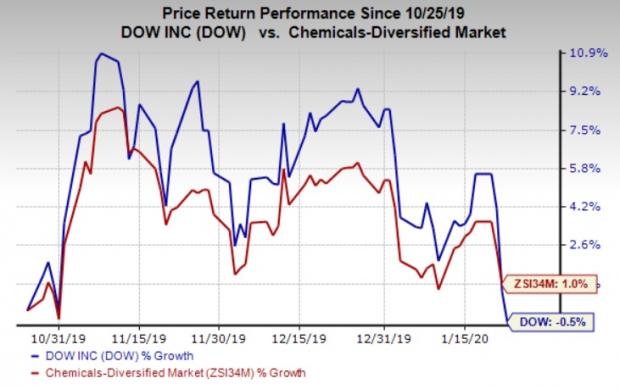 Our proven model predicts an earnings beat for Dow this time around. The combination of a positive Earnings ESP and a Zacks Rank #1 (Strong Buy), 2 (Buy) or 3 (Hold) increases the chances of an earning beat. That is the case here, as you will see below:

Earnings ESP: Earnings ESP for Dow is +0.67%. The Most Accurate Estimate and the Zacks Consensus Estimate are currently pegged at 76 cents and 75 cents, respectively. You can uncover the best stocks to buy or sell before they’re reported with our Earnings ESP Filter.

Dow expects revenues for the fourth quarter to be in the band of $9.8-$10.2 billion.

The Zacks Consensus Estimate for revenues for the fourth quarter is currently pegged at roughly $10 billion.

For the company’s Packaging & Specialty Plastics unit, revenues are expected to decrease 8% on a sequential comparison basis as the Zacks Consensus Estimate is $4,659 million for the fourth quarter. The same for the Industrial Intermediates & Infrastructure segment is pegged at $3,248 million, indicating a 3.5% sequential decline. For the Performance Materials & Coatings unit, the Zacks Consensus Estimate for revenues stands at $1,997 million, reflecting a 11.2% decline on a sequential comparison basis.

The company is expected to have benefited from cost synergy realizations in the fourth quarter. It remains focused on maintaining cost and operational discipline through cost synergy and stranded cost-removal initiatives.

Dow also remains committed to invest in attractive areas through highly accretive projects. The company is likely to have benefited, in the December quarter, from the contributions of new capacity from its U.S. Gulf Coast investments.

The company’s Packaging & Specialty Plastics segment was affected, in the last reported quarter, by an ethylene outage in Argentina. However, its Argentina assets returned to operations in the fourth quarter after remaining offline through the third quarter and are likely to have contributed to its results in the December quarter.

However, Dow is exposed to a challenging demand environment in certain markets. Weak demand is hurting its volumes across specific regions as witnessed in the last reported quarter. The company is seeing softer demand in agriculture, automotive and electronics end markets. Slowing global economic growth is hurting demand. Softer demand might have continued to put pressure on volumes and the company’s top line in the fourth quarter.

Spending related to turnaround activities also likely to have hurt margins across certain businesses in the December quarter. The company expects roughly $20 million headwind in the fourth quarter in the Performance Materials & Coatings unit due to the propylene dehydrogenation (PDH) unit turnaround. It also sees a $40 million impact from the PDH turnaround at the Industrial Intermediates & Infrastructure unit. Moreover, turnaround at the cracker in the Netherlands is expected have an unfavorable impact of $15 million in the quarter at the Packaging & Specialty Plastics segment.

The company is also likely to have faced some headwinds from reduced catalyst and licensing earnings in the quarter to be reported. It envisions an unfavorable impact of $85 million for the quarter. This is expected to have hurt margins in the Packaging & Specialty Plastics unit.

Some margin compression in siloxanes owing to pressure on pricing is also likely to have affected profits in Dow’s Performance Materials & Coatings unit in the quarter to be reported.

Bunge Limited (BG - Free Report) , scheduled to release earnings on Feb 12, has an Earnings ESP of +18.18% and carries a Zacks Rank #1. You can see the complete list of today’s Zacks #1 Rank stocks here.