The company reported better-than-expected results in each of the last four quarters, the positive earnings surprise being 5.48%, on average. Ingersoll's third-quarter adjusted earnings of $1.99 per share outpaced the Zacks Consensus Estimate of $1.91.

Over the past three months, the company’s shares have gained 7% compared with 6.2% growth recorded by the industry it belongs to. 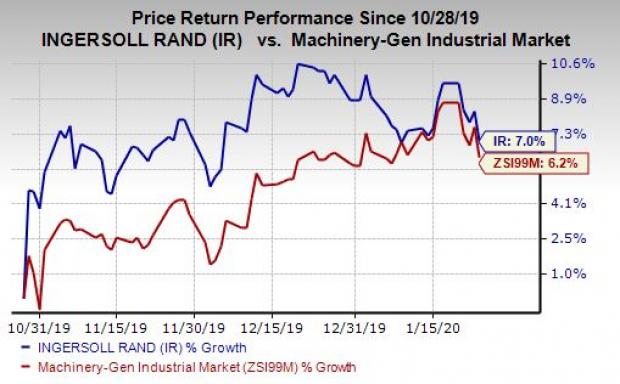 Strength across the non-residential heating, ventilation and air conditioning (HVAC) markets, particularly in North America and Europe is likely to have boosted fourth-quarter revenues of Ingersoll-Rand’s Climate segment. Also, solid bookings in residential HVAC business are likely to have bolstered the segment’s quarterly revenues. In addition, solid demand for small electric vehicles is likely to have supported the company’s Industrial segment’s revenues. However, weakness in the industrial short cycle markets might have affected the top-line performance of the Industrial segment.

Ingersoll-Rand’s productivity and pricing actions are likely to have boosted its fourth-quarter bottom-line performance. In addition, the company’s investments in innovation, technology and operational excellence projects are expected to have proved beneficial. Also, new investments made toward footprint optimization might have trimmed costs and expanded the company’s margins.

In the third quarter, acquisitions had a positive impact of 3% on revenues, a trend that most likely continued in the fourth quarter owing to strength in the acquired Precision Flow Systems business (May 2019). The buyout has been supporting the company’s existing fluid management business, and boosting margins and profitability. Notably, for 2019, Ingersoll-Rand expects the Precision Flow Systems buyout to boost sales by 1.5%.

However, in the second and third quarter of 2019, Ingersoll-Rand's cost of sales jumped 4.4% and 8%, respectively, on a year-over-year basis, on account of material inflation (resulting from tariffs and other inflationary pressures). High costs are likely to have adversely impacted the company’s margin and profitability in the fourth quarter as well.

In addition, the company’s significant international presence exposes it to political and economic disruptions. Also, it is exposed to unfavorable movements in foreign currencies, which might have affected Ingersoll-Rand’s revenues in the to-be reported quarter as well.

The Zacks Consensus Estimate for fourth-quarter revenues of Ingersoll-Rand's Climate segment is pegged at $3,165 million, indicating growth of 5.4% from the year-ago reported number. The consensus mark for Industrial segment’s revenues stands at $976 million, implying 9.2% increase.

According to our quantitative model a stock needs to have the combination of a positive Earnings ESP and a Zacks Rank #1 (Strong Buy), 2 (Buy), or at least 3 (Hold) to increase the odds of an earnings beat.

Earnings ESP: Ingersoll has an Earnings ESP of 0.00% as both the Most Accurate Estimate and the Zacks Consensus Estimate are pegged at $1.42.

Tennant Company TNC has an Earnings ESP of +4.20% and a Zacks Rank of 2. You can see the complete list of today’s Zacks #1 Rank stocks here.

Rexnord Corporation RXN has an Earnings ESP of +1.58% and a Zacks Rank of 3.