Here's Why You Should Add HealthEquity (HQY) to Portfolio Now

This $5-billion health-care account management company currently has a Zacks Rank #2 (Buy). HealthEquity’s earnings are expected to grow 25% in the next five years. Also, the company has a trailing four-quarter positive earnings surprise of 46.4%, on average. 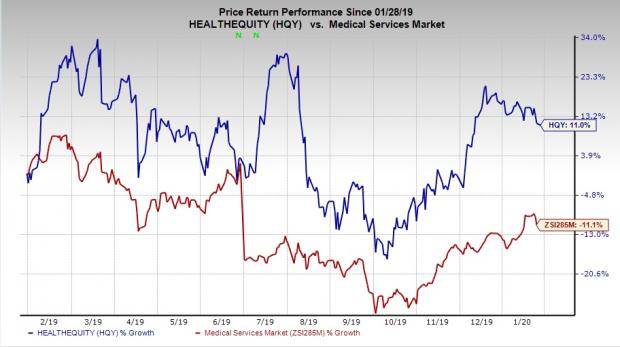 HealthEquity is an Internal Revenue Service approved non-bank custodian of HSA, which is a medical savings account available to taxpayers in the United States.

As of Oct 31, 2019, the total number of HSAs for which HealthEquity served as a non-bank custodian was 5 million.

HealthEquity clinched the top position in the HSA industry through its first-mover advantage, focus on innovation and differentiated capabilities.

The company’s market share (measured by custodial assets) has literally tripled from 4% in December 2010 to 13% in December 2018, per the 2018 Devenir HSA Research Report. Currently, HealthEquity is the third-largest HSA custodian in terms of market share.

Devenir further suggests that the HSA market will reach a worth of $88 billion in HSA assets held over by 30 million accounts by 2021-end.

Driven by the solid aspects, the company recently raised its fiscal 2020 revenue expectations.

Notably, HealthEquity now expects revenues between $520 million and $526 million, much higher than the earlier projected range of $341-$347 million.

For fiscal 2020, the Zacks Consensus Estimate for revenues is pegged at $524.1 million, suggesting a year-over-year upside of 82.5%. For adjusted EPS, the same stands at $1.50 per share, indicating growth of 26.1% from the year-ago reported figure.

Apple & Other Tech Stocks to Buy Ahead of Earnings