What's in the Cards for Caterpillar's (CAT) Q4 Earnings?

The company beat estimates in one of the trailing four quarters, with the average negative earnings surprise being 6.47%.

Which Way are Q4 Estimates Headed?

The Zacks Consensus Estimate for the fourth-quarter earnings is currently pegged at $2.37, indicating a decline of 7.06% from the prior-year quarter. The figure has also moved south by 0.4% over the past 30 days.

The U.S.-China trade war and waning global demand have taken a toll on the U.S manufacturing sector in the October-December quarter. Per the Institute for Supply Management’s latest report, the U.S Purchasing Managers’ Index (PMI) was 47.2% in December — the lowest PMI reading since 46.3% in June 2009, which marked the last month of the Great Recession. This follows a reading of 48.1% and 48.3% in November and October, respectively. The PMI remained below 50 for five consecutive months, averaging 47.9% during October-December 2019. Moreover, for the fourth quarter, total industrial production declined at an annual rate of 0.5%.

This indicates a contraction in the manufacturing sector. This is anticipated to get reflected on Caterpillar’s fourth-quarter performance.

Further, at the end of the third quarter of 2019, Caterpillar’s order backlog was at $14.6 billion, reflecting a sequential drop of $400 million. Order backlog decreased mostly in Construction Industries and Resource Industries, which reflected dealer expectations regarding lower demand from end markets in the fourth quarter. A lower backlog and the company’s steps to cut down production to match with demand, is likely to have impacted Caterpillar’s top-line performance in the fourth quarter.

The Zacks Consensus Estimate for fourth-quarter revenues is $13.59 billion, suggesting a decline of 5.27% from the prior-year quarter.

Material cost inflation, thanks to the impact of tariffs, is likely to have affected Caterpillar’s margins. However, the company’s pricing actions and significant restructuring, and cost reduction initiatives are expected to have somewhat negated this impact in the fourth-quarter performance.

How Will The Segments Fare?

For the Machinery, Energy & Transportation segment, which contributes around 90% of the company’s total revenues, the Zacks Consensus Estimate for fourth-quarter 2019 is pegged at $12.8 billion, on par with the prior-year quarter.

The Zacks Consensus Estimate for the Construction segment’s external sales is projected at $5,130 million for the to-be-reported quarter, suggesting a year-over-year decline of 9%. The estimate for the segment’s sales in Asia Pacific is at $1,338 million, reflecting year-over-year fall of 10%. North America and EAME are expected to report sales of $2,401 million and $979 million, suggesting declines of 13% and 8%, respectively, from the prior-year quarter.  Latin America is the only region in the segment that is expected to report year-over growth in revenues. The Zacks Consensus Estimate for the region is pegged at $393 million, indicating an improvement of 5% from the year-ago reported figure.

For the Energy & Transportation segment, the Zacks Consensus Estimate for external sales is currently at $5,225 million, indicating a decline of 1% from the year-ago quarter.

Our proven model does not conclusively predict a beat for Caterpillar this earnings season. The combination of a positive Earnings ESP and a Zacks Rank #1 (Strong Buy), 2 (Buy) or 3 (Hold) increases the odds of an earnings beat. But that is not the case here as you will see below. 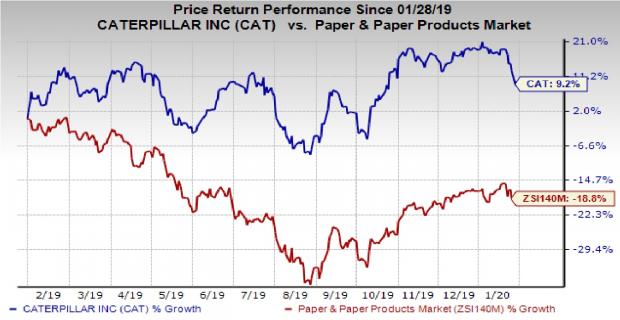 Shares of the company have gained 9.2% in a year, against the industry’s decline of 18.8%.

Here are a few Industrial Products stocks which you may consider as our model shows that these too have the right combination of elements to post an earnings beat in their upcoming releases.

Lindsay Corporation LNN has an Earnings ESP of +8.07% and a Zacks Rank of 1. You can see the complete list of today’s Zacks #1 Rank stocks here.