Of the three above-mentioned carriers, results of JetBlue impressed the most. This Long Island City, NY-based low-cost carrier’s earnings per share not only surpassed the Zacks Consensus Estimate but also increased year over year on low fuel costs. This stellar performance resulted in JetBlue shares gaining value following the release of the earnings report on Jan 23.

Meanwhile, shares of Southwest Airlines declined on the same day following its lackluster earnings report. This Dallas-based carrier’s earnings missed estimates as well as declined year over year due to high costs resulting from the Boeing 737 MAX groundings. Notably, Southwest Airlines has the largest exposure to Boeing 737 MAX jets among U.S. carriers with 34 such jets in its fleet currently.

American Airlines, with 24 Boeing 737 MAX jets in its fleet presently, reported in-line earnings per share for the October-December period. The bottom line, however, increased year over year primarily on lower fuel costs.

Notably, JetBlue does not have Boeing 737 MAX jets in its fleet, and is therefore immune to the troubles stemming from the prolonged groundings.

1. JetBlue’s fourth-quarter 2019 earnings per share came in at 56 cents per share, which surpassed the Zacks Consensus Estimate by a penny. Moreover, quarterly earnings increased 12% on a year-over-year basis. Operating revenues totaled $2,031 million, narrowly beating the Zacks Consensus Estimate. Moreover, it increased 3.2% from the year-ago number. Passenger revenues, which accounted for bulk of the top line (95.9%), improved 3% year over year in the quarter. Other revenues were also up 6.3%. (Read more: JetBlue's Q4 Earnings Surpass Estimates, Increase Y/Y).

Total revenue per available seat miles (TRASM: a key measure of unit revenues) inched up 0.5% to 16.1 cents in the reported quarter. For the first quarter of 2020, TRASM is expected to be either flat or increase up to 2% on a year-over-year basis. (Read more: American Airlines Q4 Earnings In Line, Increase Y/Y).

3. Southwest Airlines’ December-end quarter’s earnings per share of 98 cents missed the Zacks Consensus Estimate by 13 cents. In addition, the bottom line declined 16.2% year over year. During the fourth quarter, operating income (excluding special items) totaled $665 million compared with the $820 million reported in the year-earlier period. The Boeing 737 MAX 8 grounding affected operating income to the tune of $313 million during the reported quarter and $828 million in 2019.

The company expects the adversity to prevail this year as well. Further, total adjusted operating expenses (excluding profit sharing, fuel and oil expense plus special items) flared up 4.1% year over year. This upswing stemmed from the prolonged groundings and the resultant lower capacity during the quarter.(Read more: Southwest Q4 Earnings Miss, Decrease Y/Y on MAX Woes).

4. United Airlines (UAL - Free Report) , which operates a significant number of flights to China, issued a travel waiver to combat the threat posed by the rapidly-spreading coronavirus crisis. As part of the waiver, any Wuhan, China-bound United Airlines passenger can ask for the price of the ticket to be refunded, even for the non-refundable ones. The ticket, however, has to be purchased on or before Jan 21. Another airline heavyweight, Delta Air Lines (DAL - Free Report) , also issued a travel waiver through Feb 29 in response to the deadly virus. 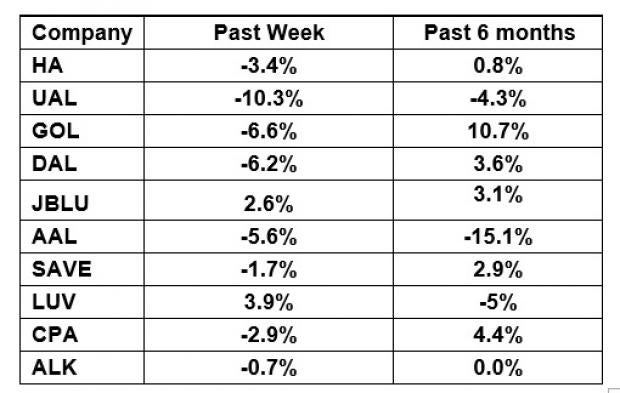