Shares of the company have gained 44.2% over the past year, outperforming the 34.6% growth of the industry it belongs to. 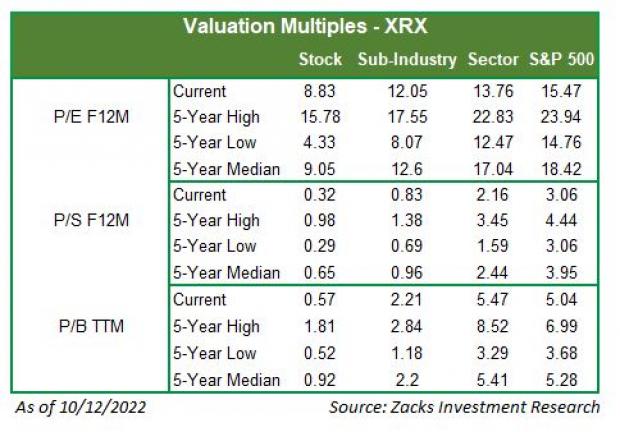 Equipment sales totaled $616 million, which declined 2.1% year over year on a reported basis and 1.5% at cc. The segment contributed 25% to total revenues.

Post sale revenues of $1.83 billion declined 2.2% year over year on a reported basis and 1.7% at cc. The segment contributed 75% to total revenues.

Revenues from Americas came in at $1.56 billion, down 3.4% year over year on a reported basis and 3.3% at cc. The region contributed 64% to total revenues.

EMEA revenues amounted to $756 million, down 8.9% year over year on a reported basis and 7.4% at cc. The region contributed 31% to total revenues.

Revenues from Other region totaled $126 million, compared with $51 million reported in the year-ago quarter. The region contributed 5% to total revenues.

The company generated $398 million of cash from continuous operations and capex was $17 million in the reported quarter. Free cash flow was $381 million. Xerox paid out $60 million in dividends in the quarter.

Xerox expects adjusted EPS in the range of $3.6 to $3.7, higher than the current Zacks Consensus Estimate of $3.37. Revenues are expected to decline roughly 4% at cc.

Adjusted operating margin is expected to be around 13%. The company expects free cash flow of approximately $1.2 billion and operating cash flow of roughly $1.3 billion.