Per media reports, the Mexican telecom regulator accused America Movil on the grounds of maintaining absolute confidentiality related to the availability of its networks. Notably, the anti-monopoly regulation in Mexico necessitates the telco provider to make its network infrastructure available to its competitors to maintain healthy competition in the telecommunications market.

However, the industry rivals claimed that in spite of America Movil’s abundant financial resources, it does not share its network infrastructure with other telecom contenders. This impedes network sharing arrangements, which are essential for wide network coverage with enhanced network capabilities. Reportedly, the hefty fine accounts for 6% of Telnor’s annual revenues.

Interestingly, the Mexican telecom giant’s subsidiaries — Telmex and Telcel — had previously been fined $127.7 million and $5.4 million, respectively in 2018. The penalty was imposed when Telmex apparently failed to meet quality standards for the telecom infrastructure offered to other companies in 2013 and 2014. Telcel was accused of having exclusive agreements with Blue Label Mexico, which prevented the company from marketing or providing communication services its competitors in the Mexican telecommunications market.

America Movil is Mexico’s prime mobile network operator with an enormous portfolio of international subscribers across 25 countries. However, its aggressive promotional strategy, discreet network sharing arrangements and AT&T Inc.’s T entry into the Mexican telecom industry with the acquisition of Grupo Iusacell and Nextel de Mexico may hurt its margins in the near term.

The stock has gained 1.9% against industry’s decline of 9.5% in the past year. 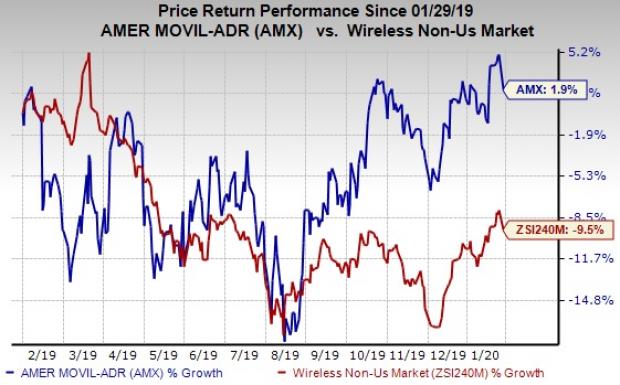 Vodafone has a long-term earnings growth rate of 14.5%.

BlackBerry exceeded estimates twice in the trailing four quarters, the positive earnings surprise being 68.8%, on average.