United Natural Foods, Inc. UNFI has an impressive top-line trend, courtesy of its focus on expanding the customer base and benefits from acquisitions. However, the company has been grappling with a soft gross margin. This along with higher interest expenses weighed on the company’s bottom line in first-quarter fiscal 2020 despite top-line growth. Also, management’s earnings guidance for fiscal 2020 was unimpressive.

Owing to these factors, shares of the company have lost 27.4% since the earnings release in December 2019. Further, the Zacks Rank #3 (Hold) stock has declined 9.1% in the past three months against the industry’s growth of 6.3%. Let’s delve deeper and see if United Natural can regain investors’ confidence. 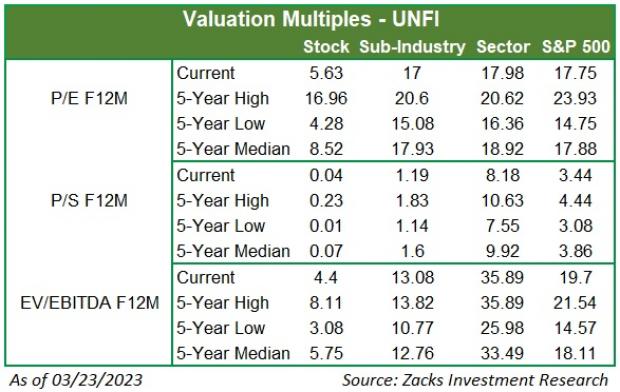 United Natural has been seeing a strained gross margin for a while. During the fiscal first quarter, the company’s gross margin contracted 157 basis points (bps) year on year to 12.81% due to the inclusion of SUPERVALU, which contributed at a reduced gross profit rate. The metric was affected by a shift in the consumer mix. In the fourth, third, second and first quarters of fiscal 2019, the gross margin contracted 167 bps, 219 bps, 217 bps and 50 bps, respectively.

Also, United Natural ended first-quarter fiscal 2020 with a total debt of $3,051.2 million, up from $1,924.2 million in the year-ago quarter. As a result, net interest expenses increased significantly year over year to $49.5 million during the fiscal first quarter. The rise in interest expenses was caused by an increase in debt outstanding due to the financing of the SUPERVALU acquisition. Higher debt levels may adversely impact the company’s creditworthiness and make it more susceptible to macroeconomic factors and competitive pressures.

These along with lower adjusted operating income led to a decline in the company’s bottom line, which came in at 12 cents and tumbled 22.7% in the said quarter, significantly lagging the Zacks Consensus Estimate of 23 cents. Further, management envisions adjusted earnings per share of $1.22-$1.76 for fiscal 2020, which indicates a decline from $2.08 reported in fiscal 2019.

On the contrary, United Natural’s top line has been steadily expanding (on a year-on-year basis) since the past few quarters. This can be attributed to the company’s well-woven strategies, presence of strong brands and favorable consumer demand. To this end, the company has been carrying out various acquisitions over the years to expand its distribution network and customer base.  Incidentally, United Natural completed the buyout of SUPERVALU in October 2018.

Though SUPERVALU’s acquisition weighed on the gross margin and elevated the company’s debt load, the enhanced scale of the combined entities has provided a radical boost to United Natural’s top line. Evidently, the buyout aided sales growth by nearly $3.1 billion during the fiscal first quarter. Other notable acquisitions of the company include Haddon House (in May 2016), Gourmet Guru (in August 2016) and Nor-Cal Produce, Inc. (in 2016).

United Natural is committed toward certain targets, such as enhancing the customer base, expanding its broad-line distribution channel and improving profitability. Additionally, management is on track with improving margins, cash flow and revenue streams. All said, it remains to be seen how far these efforts can help the company see a revival.

Lamb Weston LW has a long-term earnings growth rate of 8.8% and a Zacks Rank #2.

Sysco Corporation SYY, with a Zacks Rank #2, has a positive earnings surprise of 5.2%, on average, in the trailing four quarters.