Confidence of Americans in the country's economy jumped in January buoyed by a strong labor market with historically low unemployment, growing wages and an impressive performance by Wall Street in 2019.

Strong consumer confidence confirms U.S. economic stability and clearly indicates that the expansionary phase, which is currently at the historically longest 11.5 years, is here to stay.

On Jan 28, the conference board reported that its consumer confidence index for the month of January came in at 131.6, the highest since August 2019. The metric exceeded the consensus estimate of 128.8. Notably, December's index was also revised upward to 128.2 from 126.5 reported earlier. This clearly highlighted firmness in the U.S. economy.

Notably, a similar-type of study known as consumer sentiment conducted by the University of Michigan reported that the preliminary index for January came in at 99.1, slightly below December's reading of 99.3. However, January's preliminary metric was the second-highest in the last eight months.

The U.S. GDP growth rate did not fall below 2% in the first three quarters of 2019, buoyed by strong consumer spending, which constitutes more than 70% of the economy. Additionally, a solid labor market and gradual wage growth offset the drop in business spending and manufacturing activities, generating 12% of U.S. GDP.

The recently signed phase-one trade deal between the United States and China has significantly cooled down the nearly two year old tariff war. Although a complete deal is not likely to be signed before the U.S. presidential election this November, the interim deal will at least help in restoring U.S. business confidence and global economic growth.

Moreover, Fed’s timey intervention with a 75 basis point rate cut in 2019 boosted the economy and raised investors’ confidence. The Fed chair has reiterated his commitment to do whatever needed to support economic expansion and not raise interest rate until the inflation rate, which is currently at just 1.6%, crosses the Fed’s target level of 2%.

At this stage, it will be better to invest in consumer-centric stocks with strong growth potential. We narrowed down our search to five such stocks each carries a Zacks Rank #1 (Strong Buy). You can see the complete list of today’s Zacks #1 Rank stocks here.

The chart below shows the price performance of our five picks in the past three months. 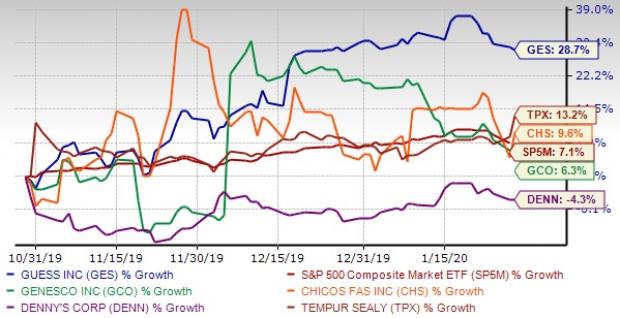 Guess' Inc. GES designs, markets, distributes and licenses lifestyle collections of apparel and accessories for men, women and children. It operates through five segments: Americas Retail, Americas Wholesale, Europe, Asia, and Licensing. The company has expected earnings growth of 27.7% for the current year. The Zacks Consensus Estimate for current-year earnings has moved 1.2% north over the last 30 days.

Genesco Inc. GCO operates as a retailer and wholesaler of footwear, apparel and accessories. It operates through four segments: Journeys Group, Schuh Group, Johnston & Murphy Group, and Licensed Brands. The company has expected earnings growth of 12.3% for the current year. The Zacks Consensus Estimate for current-year earnings has moved 0.4% north over the last 30 days.

Chico's FAS Inc. (CHS - Free Report) operates as an omnichannel specialty retailer of women's private branded casual-to-dressy clothing, intimates, and complementary accessories. It operates under the Chico's, White House Black Market, and Soma brand names. The company has expected earnings growth of 125.7% for the current year. The Zacks Consensus Estimate for current-year earnings has moved 133.3% north over the last 30 days.

Denny's Corp. DENN is one of the largest restaurant companies, operating moderately-priced restaurants. It owns and operates full-service restaurant chains under the Denny's brand. The company has expected earnings growth of 18.1% for the current year. The Zacks Consensus Estimate for current-year earnings has moved 1.3% north over the last 30 days.

Tempur Sealy International Inc. TPX develops, manufactures, markets, and distributes bedding products. It operates through two segments, North America and International. The company has expected earnings growth of 46% for the current year. The Zacks Consensus Estimate for current-year earnings has moved 0.2% north over the last 30 days.