LyondellBasell (LYB) to Post Q4 Earnings: Is a Beat in Store?

LyondellBasell Industries N.V. LYB is set to release fourth-quarter 2019 results on Jan 31, before the opening bell.

The company’s fourth-quarter results are likely to reflect benefits from low-cost natural gas, synergies from the A. Schulman acquisition and improved performance at Houston refinery. However, seasonal softening of demand and maintenance outage might have hurt volumes in the to-be-reported quarter.

The stock has lost 6% in the past year compared with the 30.3% decline of the industry. 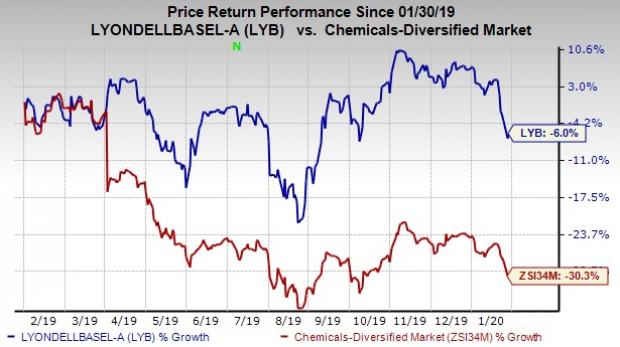 Let’s see how things are shaping before the upcoming earnings announcement.

Our proven model predicts an earnings beat for LyondellBasell this time around. The combination of a positive Earnings ESP and a Zacks Rank #1 (Strong Buy), 2 (Buy) or 3 (Hold) increases the chances of an earning beat. That is the case here, as you will see below:

Earnings ESP: Earnings ESP for LyondellBasell is +2.66%. The Most Accurate Estimate and the Zacks Consensus Estimate are currently pegged at $2.32 and $2.26, respectively. You can uncover the best stocks to buy or sell before they’re reported with our Earnings ESP Filter.

LyondellBasell is benefitting from the favorable North American natural gas environment. The Olefins and Polyolefins Americas unit is likely to have benefited from abundant and affordable natural gas liquids in the fourth quarter.

The company is also witnessing the benefits of A. Schulman buyout. At the end of third-quarter 2019, LyondellBasell captured cost synergies at an annual rate of around $125 million. The acquisition is likely to have made a positive impact on fourth-quarter margins.

The company’s fourth-quarter results are also expected to reflect improved performance at the Houston refinery. In the third quarter, refinery margins benefited from improved diesel spreads as well as purchase of portion of heavy sour crude oil at discount from the open market in Houston.

Notably, the U.S. refining market was challenged by global disruptions in the supply of heavy sour crude oil. This led to a string of quarterly losses in the company’s Refining segment. However, margins are expected to have improved in the fourth quarter due to the implementation of the IMO 2020 marine fuel regulation. In November 2019, LyondellBasell also stated that it is well positioned to take advantage of this regulatory change by converting high sulfur crude oils into more environment-friendly marine fuels.

However, industrial driven markets for durable products witnessed weaker demand and margins in the third quarter due to trade uncertainty. Also, many intermediate chemicals businesses, including styrene, suffered from weak margins due to lackluster industrial demand in a well-supplied market. The trend is likely to have continued into the fourth quarter and impacted margins. Moreover, the company expects fourth-quarter results to follow the same seasonal trend due to the reduction in year-end demand.

Moreover, maintenance at the company’s Acetyls facility in La Porte reduced volumes in the third quarter. The impact of this outage is also likely to have continued into the fourth quarter and affected volumes in the Intermediates and Derivatives segment.

The Zacks Consensus Estimate for fourth-quarter consolidated sales is pegged at $8,427 million, which suggests a fall of 5.1% year over year.

The Zacks Consensus Estimate for fourth-quarter sales for LyondellBasell’s Olefins & Polyolefins — Americas unit is currently pegged at $2,079 million, which suggests a fall of 15.1% from the year-ago quarter’s figure.

The Zacks Consensus Estimate for sales in the Olefins & Polyolefins — Europe, Asia, International segment is currently pegged at $2,140 million, which suggests an expected decline of 8.4% year over year.

The consensus mark for sales in the Intermediates and Derivatives segment is currently pegged at $1,897 million, which indicates an expected decline of 11.8% from the year-ago quarter’s tally.

The Zacks Consensus Estimate for sales in the Refining segment currently stands at $2,021 million, which suggests 10.3% increase year over year.

The consensus mark for sales in the Technology segment is currently pegged at $138 million, which suggests a rise of 20% from the year-ago quarter’s tally.

Other Stocks Poised to Beat Estimates

Bunge Limited BG, slated to release earnings on Feb 12, has an Earnings ESP of +18.18% and sports a Zacks Rank #1. You can see the complete list of today’s Zacks #1 Rank stocks here.

AK Steel Holding Corporation AKS, scheduled to release earnings on Feb 27, has an Earnings ESP of +16.67% and carries a Zacks Rank #3.