The Mosaic Company MOS announced plans to keep the Colonsay potash mine in Saskatchewan, Canada, idled for the foreseeable future.

The decision will likely impact the company’s workers. However, it will allow Mosaic to optimize its production assets in Canada and strengthen its cost position in a competitive market.

Notably, the mine will be positioned in the care and maintenance phase, employ limited staff and allow operations to be resumed when necessary to meet the needs of customers.

Per management, the expansion of its Esterhazy K3 production coupled with sustained soft demand in North America has left the potash business of Mosaic with excess inventory and production capacity. Notably, the company continues to anticipate strong global demand for fertilizer as well as healthy business conditions in 2020.

The idling is expected to result in pretax charges of approximately $530 million in the fourth quarter of 2019. The pretax charges comprise mostly non-cash charges for asset write-offs and $15-$20 million in cash severance charges. Notably, the write-off is essentially the carrying value of its 2013 expansion project, which increased the operating capacity of Colonsay to 2.1 million tons.

The average realized price of phosphate continued to decline in the fourth quarter of 2019, affecting the annual goodwill impairment analysis and leading Mosaic to anticipate a write-off of up to $590 million of the Phosphates segment’s goodwill.

Notably, Mosaic will treat charges associated with the idling or changes in goodwill balances as notable items.

Shares of the company have lost 39.1% in the past year compared with the industry’s 19.4% decline. 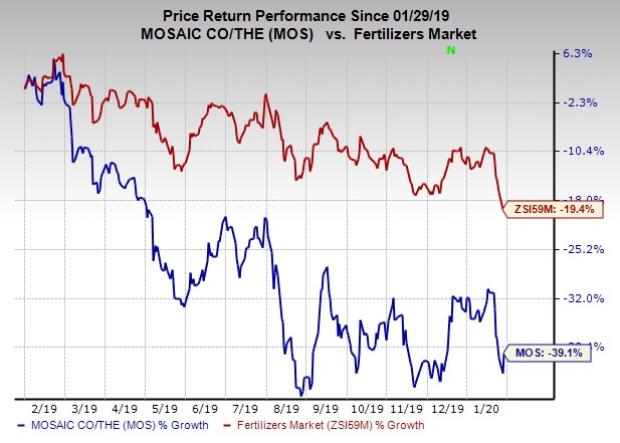 Daqo New Energy has a projected earnings growth rate of 326.3% for 2020. The company’s shares have rallied 51.4% in a year. It sports a Zacks Rank #1 (Strong Buy) at present. You can see the complete list of today’s Zacks #1 Rank stocks here.

Here's Why You Should Add HEICO (HEI) in Your Portfolio Now