The business services sector was on a strong footing driven by economic strength and stability that kept service activities in good shape in the fourth quarter. It was buoyed by a strong labor market, solid job growth and low unemployment.

Notably, U.S. GDP grew at an annualized rate of 2.1% in third-quarter 2019 compared with 2% growth in the second quarter, per estimates released by the Bureau of Economic Analysis. The Conference Board expects GDP growth of 2.2% for the fourth quarter and 2.3% for 2019.

Further, December was the 119th month of consecutive growth in non-manufacturing activities with ISM-measured Non-Manufacturing Index, touching 55%. Notably, a reading above 50 indicates growth.

Since business services firms have lower foreign exposure compared with goods companies and incur less foreign input costs, the industry was less affected by trade war in the fourth quarter.

The Zacks Business Services sector currently carries a Zacks Sector Rank in the top 32% (5 out of 16 sectors). It has gained 27.9% over the past year, outperforming the 22.1% rally of the Zacks S&P 500 composite. 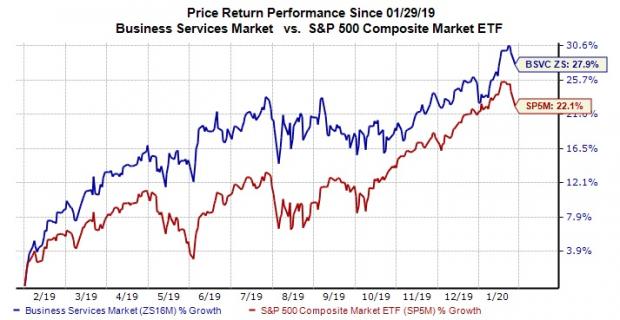 Given this backdrop, investors interested in business services stocks can watch out for four companies that are scheduled to report quarterly numbers on Jan 30.

According to the Zacks model, a company needs the right combination of two key ingredients — a positive Earnings ESP and a Zacks Rank #3 (Hold) or better — to increase the odds of an earnings surprise. You can uncover the best stocks to buy or sell before they’re reported with our Earnings ESP Filter. You can see the complete list of today’s Zacks #1 Rank (Strong Buy) stocks here.

The Zacks Consensus Estimate for revenues is pegged at $6.06 billion, indicating a 10.1% increase from the year-ago quarter’s reported figure. The company is likely to have retained its revenue momentum in the first quarter on the back of strong market position and attractive core business that are steadily driven by new deals, renewed agreements, accretive acquisitions, increasing spending via cards, shift to digital form of payments and expansion of service offerings.

Revenues are likely to have gained from higher payments volume, cross-border volumes and processed transactions.

The consensus mark for earnings stands at $1.46, indicating a rise of 12.3% from the prior-year quarter's reported number. The bottom line is expected to have gained from the company’s share buyback.

Visa has an attractive earnings surprise history, having surpassed estimates in the trailing four quarters, with positive surprise of 3.9%, on average.

Visa has an Earnings ESP of -0.43% and a Zacks Rank #3, which makes surprise prediction difficult. (Read more: Will Visa's Q1 Earnings Benefit From Revenue Growth?)

Aptiv APTV: The technology and mobility company will report fourth-quarter 2019 results before the bell.

The Zacks Consensus Estimate for revenues in the to-be-reported quarter is pegged at $3.54 billion, indicating year-over-year decline of 2.5%. Lower North American volume related to the GM strike and unfavorable impact of foreign exchange and commodities are expected to have weighed on the top line.

The consensus mark for earnings stands at $1.02, suggesting year-over-year decline of 23.9%. Unfavorable impact of GM strike is expected to have largely offset strong material and manufacturing performance, and overhead cost reduction.

Aptiv delivered four-quarter positive earnings surprise of 8.4%, on average. The company has an Earnings ESP of +1.87% and a Zacks Rank #3. (Read more: Aptiv to Post Q4 Earnings: What's in the Offing?)

Robert Half International RHI: The staffing and risk consulting services provider will report fourth-quarter 2019 results after the bell.

The Zacks Consensus Estimate for revenues in the to-be-reported quarter is pegged at $1.54 billion, indicating growth of 3.7% year over year. The company has been witnessing momentum in its U.S. staffing and Protiviti operations, a trend expected to have continued in the fourth quarter. Tight labor markets across the globe continue to sustain demand for Robert Half’s professional staffing services.

Improved operational efficiency is likely to have boosted Robert Half’s fourth-quarter 2019 earnings, the Zacks Consensus Estimate for which is pegged at 98 cents per share, indicating year-over-year growth of 3.2%.

Robert Half delivered four-quarter negative earnings surprise of 0.32%, on average. It has an Earnings ESP of 0.00% and a Zacks Rank #3. (Read more: Robert Half to Post Q4 Earnings: What's in the Offing?)

Alliance Data Systems (ADS - Free Report) : This provider of data-driven marketing and loyalty solutions is set to release fourth-quarter 2019 results before the bell.

The Zacks Consensus Estimate for revenues is pegged at $1.5 billion, indicating a decline of 27% from the year-ago quarter’s reported figure. Decrease in merchant fee revenues and redemption revenues are likely to have weighed on the company’s top line.

The consensus mark for earnings per share is pegged at $4.19, suggesting year-over-year decline of 40.5%. Restructuring charges, expenses related to the A/R build and those associated with discontinued operations (Epsilon sale) along with higher tax rate are likely to have weighed on the company’s bottom line.

The company’s earnings surprise history has not been impressive. It missed the Zacks Consensus Estimate in three of the last four quarters, delivering a negative surprise of 4.6%, on average. It has an Earnings ESP of –0.34 % and a Zacks Rank #4 (Sell).