O-I Glass, Inc. OI is scheduled to report fourth-quarter 2019 results on Feb 4, after the closing bell. The company beat estimates in one of the trailing four quarters, with the average negative earnings surprise being 3.57%.

The Zacks Consensus Estimate for the fourth-quarter earnings is currently pegged at 47 cents, indicating a decline of 23% from the prior-year quarter. The figure has remained stable over the past 30 days.

Shares of the company have fallen 35.7% in a year, compared with the industry’s decline of 29.1%. 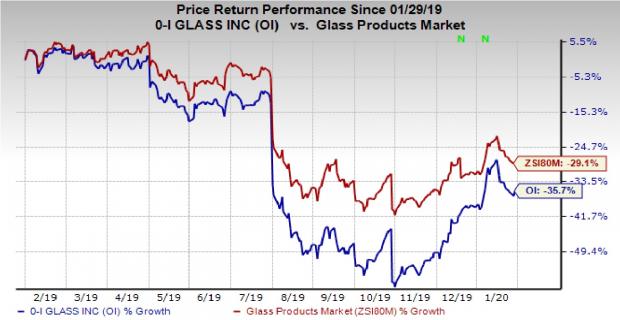 The continued decline of beer consumption in the domestic market since 2018 remains a major headwind for O-I Glass. Lower shipments to food and alcoholic beverage customers, primarily owing to the ongoing trends in beer shipments, have been impacting sales volumes. This trend is likely to get reflected in the fourth-quarter performance. The company has also been witnessing lower demand in China and is undergoing capacity curtailment in China.

In the fourth quarter, the benefit of higher selling prices and synergies from Nueva Fanal acquisition is likely to have been offset by lower volumes, unfavorable foreign currency headwinds and higher effective tax rate. The company continued to curtail capacity in the United States and Mexico in the quarter in response to lower sales, which in turn might have impacted results.

The company has also been trying to counter the impact of mega-beer decline with new business in growing categories. While this new mix is positive from a volume and margin perspective in the long run, it has led to more operational complexity and higher costs. However, O-I Glass’ focus on improving factory performance, cost reduction and business portfolio optimization are expected to have somewhat negated this impact in the fourth-quarter performance.

The Zacks Consensus Estimate for fourth-quarter revenues is $1.62 billion, suggesting a decline of 1% from the prior-year quarter.

For the Americas segment, which contributes around 57% of the company’s total revenues, the Zacks Consensus Estimate for fourth-quarter 2019 is pegged at $875 million. This indicates year-over-year decline of 9% from the prior-year quarter. The segment is expected to report an operating profit of $116 million in the fourth quarter of 2019 compared with $127 million in the prior-year quarter.

For the Asia Pacific segment (which contributes around 9% of the company’s revenues), the Zacks Consensus Estimate for sales is currently at $175 million, indicating a decline of 5% from the prior year quarter. The estimate for the segment’s operating profit is at $18.6 million, suggesting a fall of 34% from the year-ago quarter.

Our proven model does not conclusively predict a beat for O-I Glass this earnings season. The combination of a positive Earnings ESP and a Zacks Rank #1 (Strong Buy), 2 (Buy) or 3 (Hold) increases the odds of an earnings beat. But that is not the case here as you will see below.

Lindsay Corporation LNN has an Earnings ESP of +8.07% and a Zacks Rank of 1. You can see the complete list of today’s Zacks #1 Rank stocks here.