Including one-time items, the company posted net income of $1.92 per share compared with the year-ago quarter’s earnings per share (EPS) of $1.11.

Total revenues inched up nearly 0.2% year over year to $1,772.9 million. The top-line figure, however, missed the Zacks Consensus Estimate of $1,784 million. Organic sales growth came in at 2.1% in the reported quarter.

Revenues in the Label and Graphic Materials segment dipped 0.4% year over year to $1,176.2 million. On an organic basis, sales inched up 1.5%. Adjusted operating profit was up 2.6% year on year to $156 million.

Revenues in the Retail Branding and Information Solutions segment rose 3.6% year over year to $426.9 million. On an organic basis, sales were up 5.2%, as consistent strength in RFID and external embellishments. The segment’s adjusted operating income increased 15.5% to $58.1 million.

Net sales in the Industrial and Healthcare Materials segment amounted to $169.8 million, indicating a year-over-year decline of 3.1%. On an organic basis, sales were down 1.1%. The downside resulted from a mid-single digit decline in healthcare categories, partly offset by a low-single digit increase in industrial categories. The segment reported adjusted operating income of $17.4 million compared with the prior-year quarter’s $16.8 million.

The company’s board has announced a quarterly cash dividend of 58 cents per share. The dividend is payable on March 18, to shareholders of record on Mar 4, 2020.

Adjusted earnings per share for 2019 came in at $6.60, marking an improvement of 9% from the prior year. Earnings also surpassed the Zacks Consensus Estimate of $6.55. Including one-time items, earnings summed $3.57, down 32% year over year.

In 2019, revenues came in at $7.07 billion, reflecting a year-over-year decline of 1.2%. The top-line figure came in line with the Zacks Consensus Estimate. Organic sales growth was 2% during the year.

Shares of Avery Dennison have rallied 26.4% in the past year compared with the industry’s 27.3% rise. 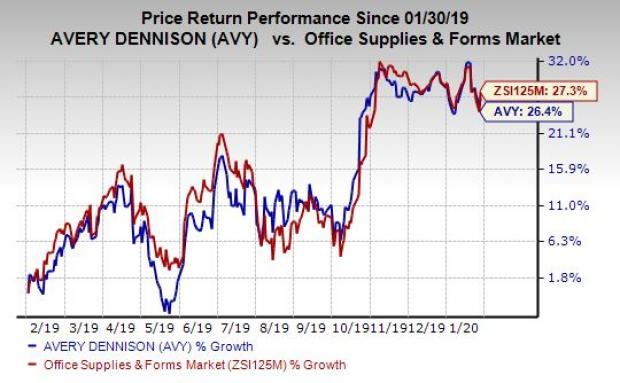