Packaging Corporation of America PKG reported adjusted earnings per share of $1.71 in fourth-quarter 2019, in line with the Zacks Consensus Estimate. Earnings came in ahead of management’s guidance of $1.70 per share. However, the reported figure fell 21.2% year over year.

This decline can be attributed to lower prices and mix in Packaging and Paper segment, higher operating costs, non-operating pension expense, depreciation expense and other costs. These negatives were, however, partly offset by higher volumes in Paper and Packaging segment, lower annual outage expenses, and reduced freight and logistics expenses.

Including one-time items, earnings in the reported quarter were $1.43 compared with the prior-year quarter’s $2.16.

Sales for the December-end quarter edged down 1.5% to $1,720 million from the prior-year quarter’s $1,746.6 million. The reported figure, however, surpassed the Zacks Consensus Estimate of $1,697 million.

Cost of products sold was up 1.2% year over year to $1,336.7 million in the reported quarter. Gross profit went down 9.8% to $383.3 million from the $425.4 million witnessed in the prior-year quarter. Selling, general and administrative expenses rose 5.6% to $137 million from the $129.7 million incurred in the year-ago quarter. Adjusted total segment operating income declined 18.8% year over year to $235.8 million.

Packaging: Sales in this segment went down to $1,460 million from the $1,504 million recorded in the year-earlier period. Segmental income, excluding special items, came in at $215.6 million in the quarter compared with the $266.7 million witnessed in the prior-year period.

Printing Papers: This segment’s revenues increased 7.3% year over year to $244 million in the quarter. Segmental income, excluding special items, improved to $43 million from the $42 million reported in the year-earlier period.

Sales declined 0.7% year over year to $6.96 billion from the prior year’s $7.01 billion. However, the top-line figure outpaced the Zacks Consensus Estimate of $6.94 billion.

For the current quarter, the company expects softer prices and lower export pricing for the Packaging segment. Containerboard volumes are likely to be lower due to scheduled outages at three largest mills during the quarter. Nonetheless, the company expects higher corrugated products shipments.

For the Paper segment, volumes are anticipated to be lower during first-quarter 2020. Scheduled outage costs are expected to be significantly higher. Also, freight and labor costs are likely to be higher. Due to cold weather, energy and wood costs might flare up during this period. Considering these, the company envisions first-quarter earnings at $1.20 per share.

Over the past year, Packaging Corporation’s stock has gained 11.3% as against the industry’s decline of 25.1%. 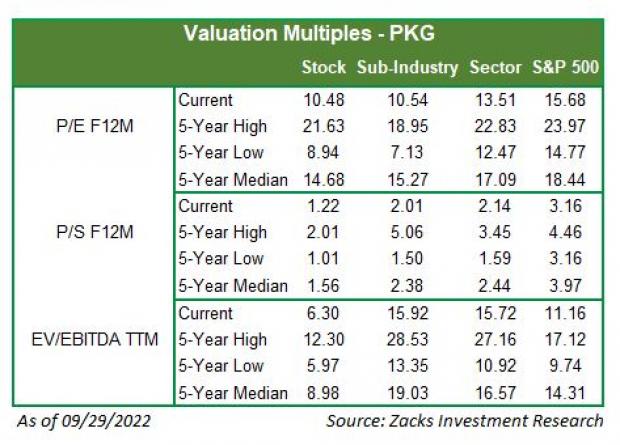