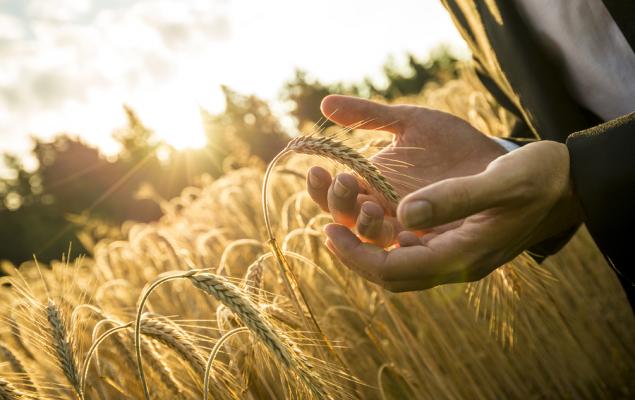 Adjusted earnings of $1.42 per share rose 61.4% from the year-ago quarter and outpaced the Zacks Consensus Estimate of 79 cents. On a reported basis, the company’s earnings were 90 cents per share, up 63.6% from the prior-year quarter.

Earnings, on a reported and adjusted basis, benefited from the announcement of retroactive biodiesel tax credit (BTC) for 2018 and 2019, which provided subsidy for fuel made from cooking oil, soybean oil and animal fat. This led to incremental earnings of 61 cents per share in the fourth quarter. Additionally, strong Nutrition business, and robust global demand for biodiesel and food oils aided results.

Revenues improved 2.4% year over year to $16,329 million and surpassed the Zacks Consensus Estimate of $15,080 million. The top line benefited from robust sales growth in the Nutrition segment.

Driven by the strong results, shares of the leading producer of food and beverage ingredients rose 3% in the after-hours trading on Jan 29. In the past six months, shares of the Zacks Rank #3 (Hold) company have grown 6.3% against the industry’s 0.6% decline. 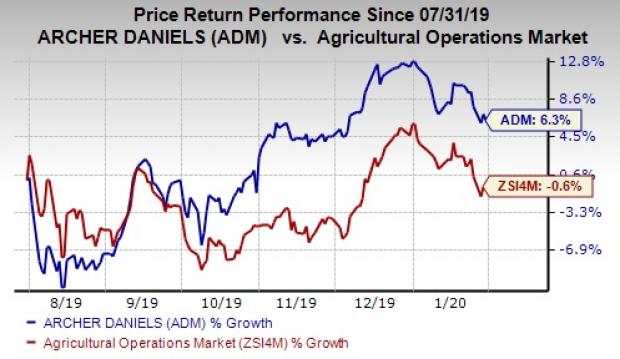 Going by segments, revenues for Nutrition segment rose 57% year over year to $1,414 million. Meanwhile, revenues for Ag Services & Oilseeds, and Carbohydrate Solutions segments were $12,359 million and $2,477 million, respectively, reflecting a decline of 0.8% each. Revenues for the Other segment declined 12.2% to $79 million.

Moreover, Archer Daniels reported adjusted segment operating profit of $1,028 million in fourth-quarter 2019, up 19.5% from the year-ago quarter. On a GAAP basis, the company’s segmental operating profits rose 18.8% year over year to $934 million.

On a segmental adjusted basis, adjusted operating profit at Ag Services & Oilseeds improved 20.2% year over year to $739 million. Operating results gained from the passage of BTC. Operating results for the Ag Services business were slightly down year over year on softness in North America due to a delayed harvest in the United States. This led to lower exports and a consequent decline in margins. Meanwhile, improved margins, stemming from robust export demand and farmer selling, aided results in South America.

The Crushing business witnessed strong margins, which was lower than the record levels seen last year. However, Crushing results remained soft year over year, owing to negative impacts of timing in the reported quarter. Operating results for Refined Products and Other improved substantially on gains from the passage of BTC. Additionally, the unit witnessed strong and substantial gains from robust global demand for biodiesel and food oils as well as the Algar Agro acquisition in Brazil. Meanwhile, Wilmar witnessed a slight improvement year over year.

The Carbohydrate Solutions segment’s adjusted operating profit declined 11.7% to $174 million, owing to strong results from Starches and Sweeteners, offset by a decline in Bio-products. Lower manufacturing costs and higher income from co-products in North America primarily aided results for Starches and Sweeteners. This was partly offset by soft margins in EMEAI. Further, results gained from strong performance at global wheat milling. Meanwhile, results for Bio-products were principally hurt by unfavorable ethanol industry margins.

At the Nutrition segment, adjusted operating profit of $102 million improved 64.5% from $62 million in the year-ago quarter, owing to significant gains in WFSI and Animal Nutrition units. Results for WFSI benefited from robust sales and margins for WILD in North America, EMEAI and APAC. The Specialty Ingredients unit gained from sustained margin growth in proteins, offset largely by soft sales volume and margins in emulsifiers as well as lower edible beans margins. Health & Wellness results were aided by new agreement for ADM fermentation capacity. In Animal Nutrition, results reflected positive contributions from Neovia, offset by persistent losses in lysine on weak global pricing environment.

Archer Daniels ended 2019 with cash and cash equivalents of $852 million, long-term debt — including current maturities — of $7,679 million, and shareholders’ equity of $19,225 million.

In 2019, the company used $5,452 million in cash for operating activities. Additionally, it bought back shares of $150 million and paid out dividends of $789 million in 2019. Further, its average trailing four-quarter adjusted return on invested capital (ROIC) was 7.5%.