Per the deal, KBR will train private astronauts with a wide range of spaceflight tasks. These tasks will include operating onboard International Space Station (“ISS”) systems, integrating the existing ISS crew, routine operational jobs, maintaining health and performance, and responding to emergencies. Also, KBR will offer medical operations and services throughout the spaceflights.

Notably, KBR will ensure solid preparation of these astronauts, so that they can fly to the ISS and beyond.

KBR has been training and supporting NASA and ISS international partner astronauts over the years. KBR has pioneered space travel for more than half a century. Notably, the recent agreement directly supports one of the five elements of NASA's plan to open the ISS to new commercial and marketing opportunities. Markedly, the company intends to work with NASA to propel the mission to fuel a low-Earth orbit economy and advance the future of commercial space.

Importantly, KBR will further work as a subcontractor to Axiom Space to support this mission on the first commercial destination module for the ISS.

A Look at KBR’s Performance & Prospects

The contract with NASA reflects KBR’s ability to cash on big government projects to drive revenues. The company’s backlog level of $14.64 billion (as of Sep 30, 2019) highlights its underlying strength. It believes solid project execution strategy will ultimately help in margin expansion. 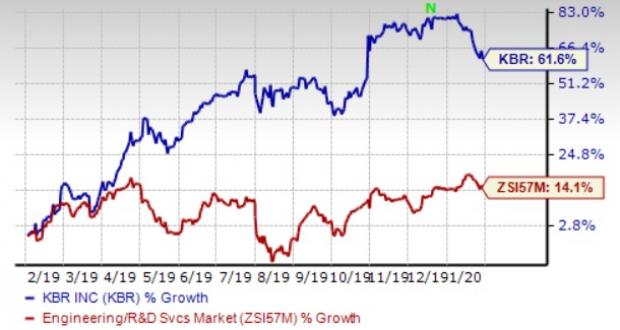 Shares of KBR have broadly outperformed the industry in a year’s time. Its shares have surged 61.6% compared with the industry’s growth of 14.1% in the same period, owing to ongoing contract wins, acquisitions and robust organic growth.

We believe that the recent move will further boost its performance. Particularly its Government Service segment, accounting for more than 68% of total revenues, has been performing well.

Growth in KBR’s overseas logistics and mission support programs — given higher military exercise activities, increased outsourcing of sustainment activities by the military and the ramp up of new wins — is expected to benefit the company in the long run. Moreover, higher tasking for various missile defense and other military priorities in its engineering business areas — under select IDIQ contracts — will support growth.

KBR expects growth across all key markets in the United States, the U.K. and Australia, driven by continued opportunities across the lifecycle of projects.