The American housing market is in the pink, thanks to the recent slump in mortgage rates following Fed’s continuing dovish stance. After all, as borrowing rates decline, potential homebuyers could finally purchase their dream home. Investors could thus consider buying a few construction stocks, which could shine ahead.

The Federal Reserve on Wednesday stressed that the economy is in good shape. The central bank held benchmark rates steady (currently in the range of 1.50%-1.75%) in its first policy-setting meeting of this year, keeping its economic outlook almost unchanged as the economy continued with its 12th year of expansion, the longest in history.

The Fed had cut interest rates thrice last year (a total of 75 basis points), finally arriving at the current rates that have been in place since the latter part of 2019.

The major reason behind the central bank keeping its interest rates untouched is the fact that inflation remained well below the bank’s target of 2%. This is why it is possible that the Fed might lower interest rates in the future instead of raising it.

Meanwhile, Fed’s low rates have supported the American housing market since mortgage rates have also gone down because of it. Should the Fed decide to lower rates further ahead, it would impact mortgage rates as well, dragging the already-low figure further down. Thus, attractive borrowing rates definitely aid homebuyer sentiment.

Per the Freddie Mac Primary Mortgage Market Survey, the average U.S. fixed rate for a 30-year mortgage averaged 3.51% for the week ended Feb 1, dropping to the second-lowest level in three years.

Last but not the least, consumer confidence in the United States rose more than expected in January as the outlook for the current job market improved and optimism around future job prospects rose. The Conference Board’s Consumer Confidence Index climbed to 131.6 in January from 126.5 the month before. January’s consumer confidence is at its highest level since August 2019. Better-than-expected consumer sentiment shall certainly prop up home sales.

According to the National Association of Realtors, existing-home sales already increased in December, bouncing back after a minor fall in November. Total existing-home sales, which comprise single-family homes, townhomes, condominiums and co-ops, rose 3.6% from November to a seasonally adjusted annual rate of 5.54 million in December.

In addition, the economic indicatorthat indicates toward the number of privately owned new houses on which construction work has begun also climbed in December. Privatelyowned housing starts in December were 16.9% higher than the revised November estimate of 1,375,000.

Construction Stocks in a Sweet Spot

Given the favorable scenario at present, we have handpicked four construction stocks that are positioned perfectly to benefit ahead. All of these stocks carry a Zacks Rank #1 (Strong Buy) or 2 (Buy).

Installed Building Products, Inc. IBP is a company that engages in the installation of insulation, waterproofing, fireproofing, garage doors, rain gutters, window blinds, shower doors and numerous other such products.

Shares of this Zacks Rank #1 company have risen 71.5%, outperforming the Zacks Building Products - Miscellaneous industry’s rise of 24.3% over a year.In addition, the Zacks Consensus Estimate for Installed Building Products’ current-year earnings has moved 0.5% north in the past 60 days. You can see the complete list of today’s Zacks #1 Rank stocks here.

M/I Homes, Inc. (MHO - Free Report) is a builder of single-family homes. Shares of this Zacks Rank #2 company have risen 72.2%, outperforming the Zacks Building Products - Home Builders industry’s rise of 44.6% over a year.In addition, the Zacks Consensus Estimate for M/I Homes’ current-year earnings has moved 3.5% north in the past 60 days.

D.R. Horton, Inc. DHI is a homebuilding company. Shares of this Zacks Rank #2 company have risen 56.9%, outperforming the Zacks Building Products - Home Builders industry’s rise of 44.6% over a year.In addition, the Zacks Consensus Estimate for D.R. Horton’s current-year earnings has moved 7.7% north in the past 60 days. 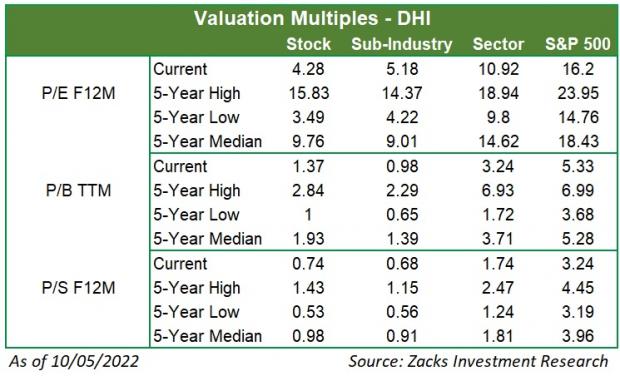 What's in the Offing for New Residential's (NRZ) Q4 Earnings?