The bottom line in the reported quarter was hurt by restructuring charges, mainly related to the company's earlier announced plan to permanently shut down a chlor alkali plant and a vinylidene chloride (“VDC”) production facility in Freeport, TX.

Excluding one-time items, adjusted loss for the quarter was 8 cents per share, which was narrower than the Zacks Consensus Estimate of a loss of 10 cents.

The chemical maker’s revenues fell roughly 15% year over year to $1,387.1 million in the quarter. However, it topped the Zacks Consensus Estimate of $1,330.7 million.

Chlor Alkali Products and Vinyls: Revenues at the division fell around 22% year over year to $762.4 million in the reported quarter on lower caustic soda and ethylene dichloride pricing.

Epoxy: Revenues at the division dropped around 8% year over year to $470 million on lower product prices that more than offset increased resin volumes.

Winchester: Revenues rose around 6% year over year to $154.7 million on higher commercial sales.

The company repurchased roughly 7.9 million shares worth $145.9 million during 2019.

Moving ahead, Olin expects to continue witnessing a challenging pricing environment this year. The company envisions its cost control and productivity actions from 2019 along with ongoing initiatives in 2020 to partly offset the weak product pricing environment.

The company anticipates the closures of the chlor alkali plant and the VDC facility to complete before the end of this year. It expects these actions, when completed, to reduce its annual operating costs by around $35 million. 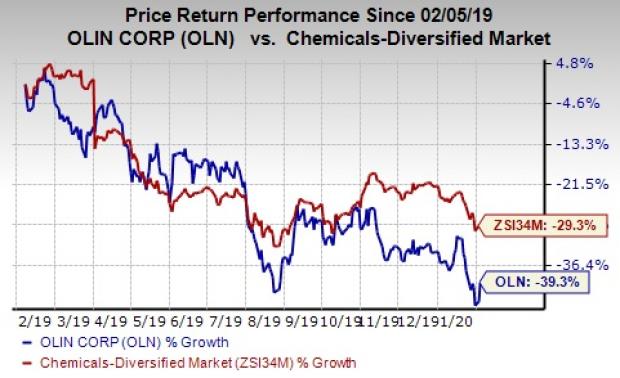 Daqo New Energy has projected earnings growth rate of 326.3% for 2020 and sports a Zacks Rank #1 (Strong Buy). The company’s shares have rallied roughly 71% in a year’s time. You can see the complete list of today’s Zacks #1 Rank stocks here.

Royal Gold has estimated earnings growth rate of 83.5% for fiscal 2020 and carries a Zacks Rank #1. The company’s shares have shot up roughly 27% in a year’s time.

Pretium Resources has projected earnings growth rate of 106.9% for 2020 and carries a Zacks Rank #2 (Buy). The company’s shares have rallied around 30% over a year.