Sealed Air (SEE) to Report Q4 Earnings: What to Expect?

Sealed Air Corporation SEE is scheduled to report fourth-quarter 2019 results on Nov 11, before the opening bell.

The global leader in food safety and security, and product protection has an impressive surprise history. Sealed Air’s earnings surpassed the Zacks Consensus Estimate in the trailing four quarters by 10.51%, on average.

The slowdown in the global industrial market is likely to have impacted demand in the fourth quarter. Nevertheless, demand from fresh food market and the e-commerce sector is likely to have mitigated some of the impact and contributed to the  fourth-quarter performance. Further, the company’s recent acquisitions, notably of Automated Packaging Systems and AFP, are likely to have benefited the top line in the quarter to be reported.

In December 2018, Sealed Air announced a reformation plan — Reinvent SEE Strategy — along with a fresh restructuring program to drive growth and earnings. The strategy is focused on innovations, SG&A productivity, product-cost efficiency, channel optimization and customer-service enhancements. Savings from these initiatives are likely to have contributed to the operating margin and, in turn, are expected to have driven the fourth-quarter performance.

However, currency headwinds, input cost inflation and higher freight charges are likely to have impacted margins in the quarter under review. Moreover, as Sealed Air continued to invest in R&D, and sales and marketing to drive future growth, the bottom line is expected to reflect the impact of higher R&D expenses in the to-be-reported quarter.

How Will the Segments Fare?

The Zacks Consensus Estimate for the Food Care segment’s fourth-quarter net sales is pegged at $771 million, indicating a year-over-year decline of 0.1%. The Zacks Consensus Estimate for the segment’s adjusted earnings before interest, taxes, depreciation and amortization (EBITDA) is pegged at $172 million, suggesting growth of 6% from the prior-year quarter. Unfavorable currency movement is likely to have impacted Food Care results in the to-be-reported quarter.

The Zacks Consensus Estimate for the Product Care segment’s net sales is pegged at $532 million for the fourth quarter, indicating year-over-year improvement of 9%. The Zacks Consensus Estimate for the segment’s EBITDA is $92 million, suggesting growth of 8% from $85 million reported in the prior-year quarter. Currency headwind and lower volume growth due to decelerating global industrial market, and the trade dispute between the United States and China might have weighed on the segment’s results in the fourth quarter.

The company’s traditional packaging solutions, which include Bubble Wrap, standardized mailers, shrink film and void fill, generate around one-third of the Product Care segment’s sales. This part of the segment is bearing the brunt of the market’s shift to automation and the global industrial manufacturing slowdown. Moreover, specialty industrial applications, which include the Instapak platform and integrated fabrication solutions that account for another one-third of Product Care sales, also remains weak owing to lower global industrial demand and the U.S.-China trade war. 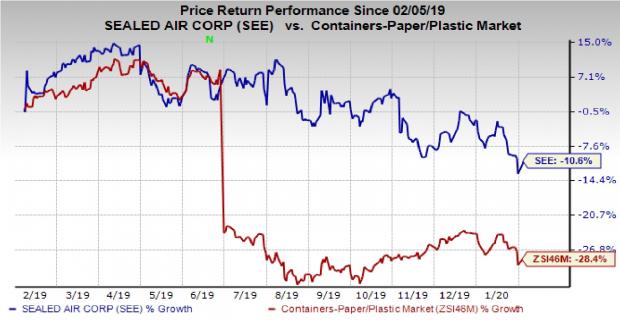 Over the past year, shares of Sealed Air have fallen 10.6% compared with the industry’s decline of 28.4%.

Our proven model does not conclusively predict an earnings beat for Sealed Air this season. The combination of a positive Earnings ESP and a Zacks Rank #1 (Strong Buy), 2 (Buy) or 3 (Hold) increases the odds of a positive surprise. But that’s not the case here.

Earnings ESP: Sealed Air has an Earnings ESP of -0.23%. You can uncover the best stocks to buy or sell before they’re reported with our Earnings ESP Filter.