O-I Glass, Inc. OI reported fourth-quarter 2019 adjusted earnings of 50 cents per share, surpassing the Zacks Consensus Estimate of 47 cents. Results came in at the higher end of the company’s guided range of 45 cents to 50 cents. Earnings reflected elevated selling prices and higher shipments which more than offset soaring operating costs. However, the bottom line declined 18% from the prior-year quarter figure of 61 cents.

Including one-time items, the company recorded earnings per share of 20 cents in the reported quarter, as against a loss of 79 cents per share reported in the prior-year quarter.

Total operating profit was $200 million in the reported quarter, down from the prior-year quarter’s $211 million.

O-I Glass continues to advance the tactical and strategic portfolio review in order to boost the company’s competitive position and create shareholder value. This includes the evaluation of alternatives for its Australia and New Zealand (“ANZ”) operation. Moreover, the first commercial-quality products were delivered, using the MAGMA technology. Further, the company announced the expansion of MAGMA at Holzminden, Germany, which will begin production in the second half of 2020.

In December 2019, the company completed a corporate modernization effort, which resulted in the creation of O-I Glass, the new public entity.

The company now expects adjusted earnings per guidance for 2020 in the band of $2.10 to $2.25. The guidance reflects higher selling prices and sales volumes will be flat to up 2% supported by capacity expansion initiatives and Nueva Fanal acquisition. O-I Glass also expects improved operating costs, reflecting several turnaround initiatives as well as footprint adjustments in North America. These factors will boost the current year’s results. Cash provided by continuing operating activities for this year is expected to exceed $650 million. Capital expenditure is expected between $350 million and $375 million. The guidance also assumes the negative impact of foreign-currency translation.

The company is focused on improving operating performance with major turnaround initiatives including revenue optimization, factory performance and cost transformation. It has identified more than $150 million of benefits over the next three years, and is targeting between $35 million and $50 million of net benefits in the current year.

O-I Glass’ stock has lost around 32% in a year’s time compared with the industry’s decline of 26.3%. 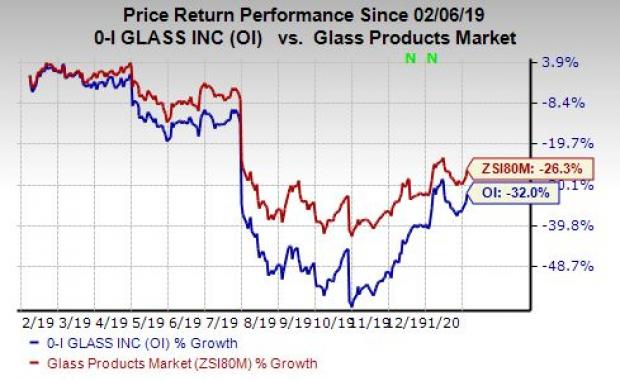