The stock grew 6.6% since it reported quarterly results as EPS guidance for first-quarter 2020 was encouraging. The company anticipates EPS in the range of $1.33-$1.41, the midpoint of which ($1.37) is above the Zacks Consensus Estimate of $1.35.

The stock has gained 24.5% over the past year, against the 7.3% decline of the industry it belongs to. 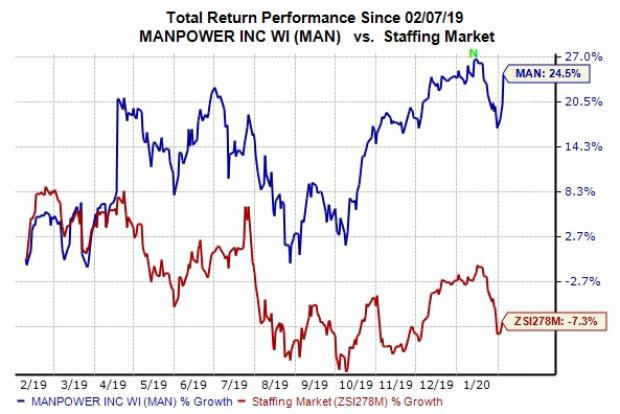 Quarterly adjusted earnings of $2.15 per share surpassed the Zacks Consensus Estimate by 5.4% but declined 11.9% year over year. Earnings came above the guided range of $2-$2.08 per share.

Revenues of $5.2 billion marginally beat the consensus mark but declined 3.6% year over year on a reported basis and 2% on a constant-currency basis. Challenging market environment in Europe continues to weigh on the company’s top line.

Northern Europe revenues declined 8.7% on a reported basis and 6.4% on a constant-currency basis to $1.16 billion. The segment accounted for 22% of total revenues in the quarter.

APME revenues totaled $596.5 million, down 18.5% on a reported basis and 19.4% on a constant-currency basis. The segment contributed 12% to total revenues.

Revenues from the Right Management business were up 3.8% year over year on a reported basis and 4.6% on a constant-currency basis to $52 million.The segment contributed 1% to total revenues.

The company expects revenues to be down 2% to flat on a constant-currency basis. It anticipates income tax rate in the first quarter to be around 35.5%.