The Timken Company (TKR - Free Report) reported fourth-quarter 2019 adjusted earnings per share of 84 cents, which fell short of the Zacks Consensus Estimate of 95 cents. The reported figure declined 16% from $1.00 per share in the prior-year quarter.  Lower volumes, and higher manufacturing and SG&A costs, partially offset by positive pricing and lower material and logistics costs, led to the overall decline in the company’s earnings.

On a reported basis, Timken delivered earnings per share of $1.48 in the fourth quarter compared with the prior-year quarter’s 77 cents.

Total revenues in the quarter came in at $896 million, down 1.5% from the year-ago quarter due to lower demand, mainly in the Mobile Industries segment, and unfavorable currency, partially offset by the favorable impact of acquisitions and pricing. The top-line figure, however, beat the Zacks Consensus Estimate of $884 million.

Selling, general and administrative expenses flared up 7% to $159 million from $148 million in the prior-year quarter. Operating profit decreased 9% year over year to $97 million. Operating margin came in at 10.8% compared with 11.7% in the comparable period last year. Adjusted EBITDA declined 10.5% year over year to $145.8 million.

The Mobile Industries segment revenues decreased to $445 million from $462 million in the year-ago quarter. This downside mainly resulted from lower shipments in off-highway and heavy trucks, partly offset by the benefit of acquisitions and growth in rail and aerospace sectors. The segment’s adjusted EBITDA declined 7% year over year to $60.3 million.

The Process Industries segment revenues increased 1% year over year to $451 million in the quarter, aided by acquisitions and growth in the renewable energy sector. This was partly muted by lower revenues recorded in industrial and marine sectors as well as unfavorable currency-translation impact. The segment’s adjusted EBITDA dipped 10% year over year to $98.3 million.

During the year, the company returned $148 million of capital to shareholders through $85 million of dividend payouts and $63 million in share repurchases.

Sales rose 6% year over year to around $3.8 billion from the prior-year figure of $3.6 billion. The top line came in line with the Zacks Consensus Estimate.

In 2019, Timken completed the acquisition of BEKA Lubrication for $165 million. This buyout makes Timken the world's second-largest producer of industrial automatic lubrication systems. It has also enhanced the company's position in lucrative markets such as wind, and food and beverage.

For 2020, Timken now expects total revenues in the range of down 2% to up 2% from 2019. The guidance factors in acquisition benefits along with unfavorable currency translation and expected organic declines in Mobile Industries. For the full year, the company anticipates adjusted earnings per share of $4.25 to $4.65. The midpoint of the guidance reflects a year-over-year drop of 3%. 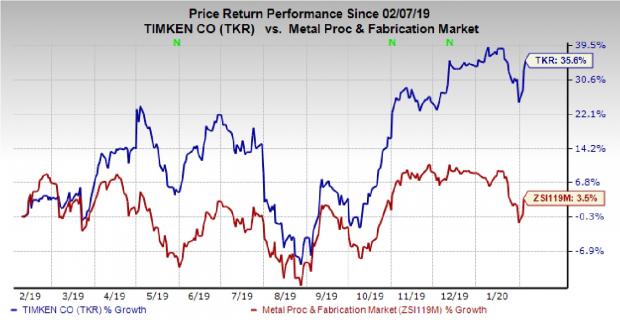 Shares of the company have appreciated around 35.6% over the past year compared with the industry’s growth of 3.5%.

Tennant has an estimated earnings growth rate of 4.0% for the ongoing year. In a year’s time, the stock has appreciated 34%.

Cintas has an expected earnings growth rate of 15.7% for the current year. The stock has surged 52% over the past year.