Gol Linhas Aereas Inteligentes S.A.’s GOL traffic report for January was impressive. Both consolidated traffic and load factor (% of seats filled with passengers) increased on a year-over-year basis despite sluggish performance on the international front.

On a year-over-year basis, consolidated capacity (measured in available seat kilometers/ASKs) declined 0.1% to approximately 5.17 billion, primarily due to a 1.3% contraction in international capacity. Domestic capacity expanded 0.2%.

Moreover, the carrier witnessed a 5.5% increase in passenger count during the first month of 2020 on a consolidated basis. Consolidated load factor improved to 83.9% from January 2018’s 83.5%, as traffic grew and capacity contracted.

Shares of Gol Linhas have outperformed the industry in a year’s time, mainly owing to strong travel demand. Shares of the carrier have gained 17.3% in a year compared with the industry’s 0.2% appreciation in the same time period. 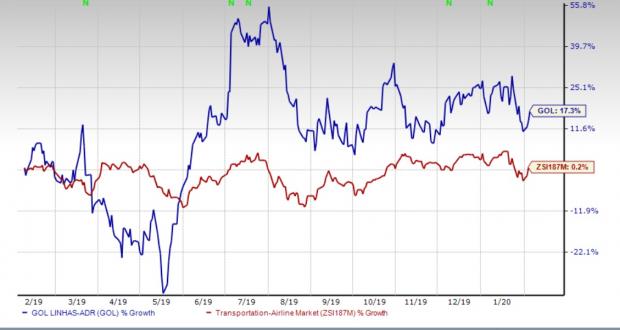 Owing to solid demand, passenger revenues rose 24.1% in the first nine months of 2019. With the current air-travel demand being impressive, the trend most likely continued in the fourth quarter of 2019. Detailed results should be out on Feb 20.